45-Km Phase-1 Of Chennai Metro Will Be Fully Operational As 9.5-Km Washermanpet-DMS Stretch Opens By January-End 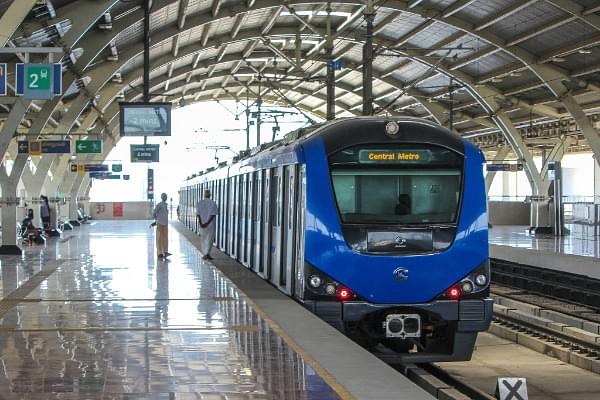 Metro Rail Safety Commissioner KA Manoharan, today (19 January), inspected the Chennai DMS-Washermanpet route, the last stretch of 45-km Phase-1 of Chennai Metro that is set to be thrown open to the public by the end of January.

The commissioner inspected the track, airflow, signal and other parameters this morning. The commissioner will also inspect the stations, the tunnel, passenger information system, public addressing systems, communication and telecom lines in the stations and station control rooms.

The 9.5-km underground line between Washermenpet and AG-DMS is the last leg of the 45-km phase-1 of the Chennai Metro and has eight underground stations including Washermenpet, Mannadi, High Court, Central, Government Estate, LIC, Thousand Lights, and AG-DMS. The stretch cuts through the city’s arterial Anna Salai.

Once 9.5 km line opens to the public, it will mark the completion of entire Phase-1 of Chennai Metro. Commuters will be able to reach airport from Washermenpet, in the northern part of city, covering 23.5 km in less than 60 minutes. A significant boost in the ridership in the network. is expected.

As of now, the stretches from AG-DMS to airport, Chennai Central to St Thomas Mount and Koyambedu to airport, totalling 35 km, are operational.

Bansal pointed out the example of Bengaluru metro, which saw a ridership of just 36,000 for a network of 36 km but when it was extended to 43 km, the ridership dramatically increased to nearly 3.5 lakh per day.

A 9-km stretch between Washermenpet and Wimco Nagar, which was announced as an extension of Phase-1 and on which work started in June 2016, is likely to be operational by June 2020.

Seventy-five per cent of the funding for the Phase-2 has been firmed up with the Japanese funding agency. Soil testing is going on at various places and in a year, ground level work will begin. Thee 119-km network is expected to be operational by 2024.