61 Dead, 72 Seriously Injured in Amritsar After Dussehra Crowd Gets Run Over By Train 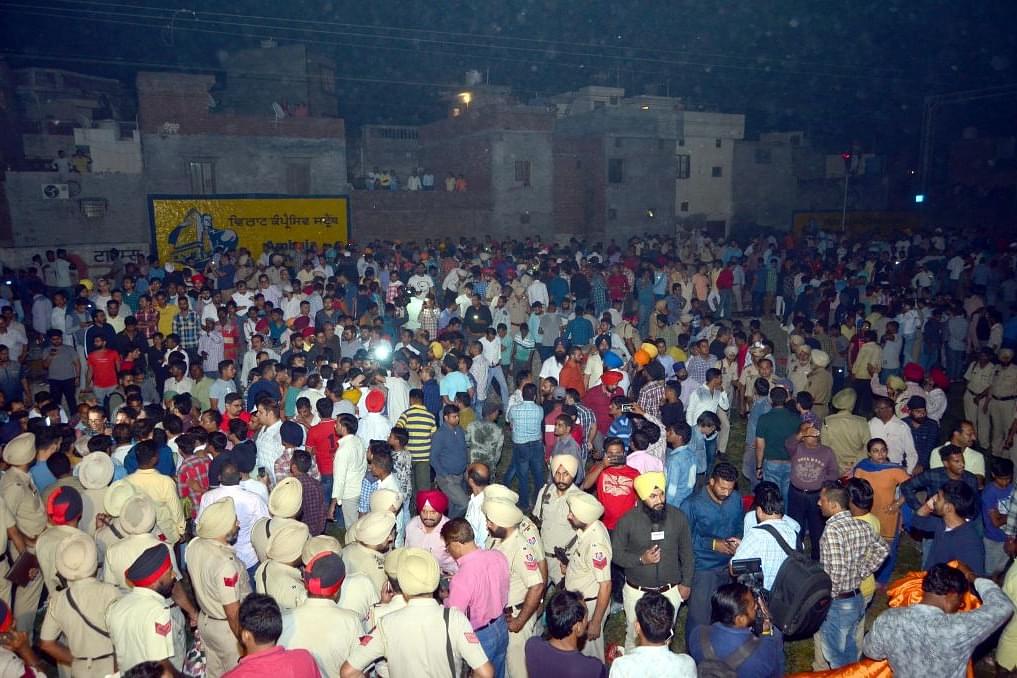 Police and locals gathered around dead bodies on October 19, 2018 in Amritsar. Several people were killed after a train ran into crowds at Joda Phatak crossing. (Photo by Sameer Sehgal/Hindustan Times via Getty Images)

In a grievous turn of events, 61 people lost their lives within the span of a minute as an inbound train ran over the crowd gathered for local Dussehra celebrations. The people were watching the effigy of Ravana burn as part of the celebrations. 72 others are seriously injured and the death toll is expected to rise, reports Economic Times.

The noise from the fireworks overshadowed that of the speeding train. Therefore, none of those who stood there could clear the track in time. Some 300 people had gathered at the place to watch the celebrations.

The organisers had instructed the people to move back lest they be injured by the firecrackers, which is when the crowd moved back towards the train tracks.

The unfortunate incident took place near Joda Fatak area of Amritsar. The train which was coming was the Jalandhar-Amritsar DMU, Times of India reported.

Amritsar (East) is represented by Navjot Singh Sidhu, a cabinet minister in the Punjab Congress government. His wife Navjot Kaur Sidhu, former MLA, was the chief guest at the celebrations. She claimed that she left the spot minutes before the tragedy took place.

Horrific #AmritsarTrainAccident - Over 50 dead, 100s injured in India as speeding train plows into a huge crowd sitting on the railway track watching the culmination of the Dusshera festival. pic.twitter.com/k0mkaDbxKz

Punjab Chief Minister Capt. Amarinder Singh has announced a compensation of Rs 5 lakh to the family of deceased and those injured will receive free treatment. He is expected to reach Amritsar on Saturday to assess the situation.

Trespassing onto the railway tracks is an offence under Railways Act, therefore the officials are investigating who is responsible for sending the people over there. The organisers will be pulled up soon to find out if they had the right permissions to organise the celebration, a report from Times of India stated.