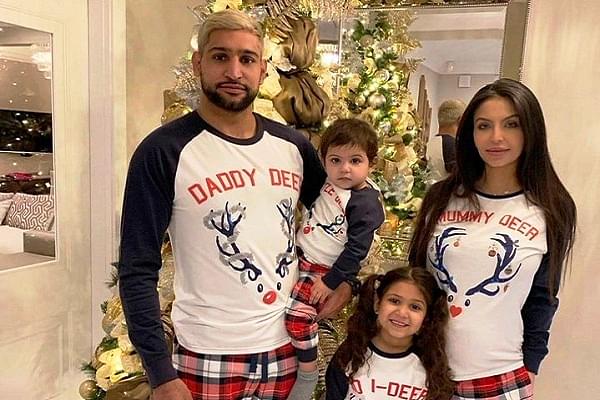 Ace British boxer Amir Khan was heckled by Islamists after he posted a picture of him celebrating Christmas at his home with family.

Khan on 25 December uploaded a sweet picture of him, his wife and two kids celebrating Christmas at their home, in front of a Christmas tree, while wearing matching holiday season t-shirts.

This though angered some online Islamists who asserted that Khan being a Muslim should not indulge in such celebrations.

Brother Muslims are not supposed to wish,, becoz there is wrong faith behind this , May Allah Almighty guide us all in the straight path #Ameen

so wrng amir so wrng

We muslims celebrate Eid.
Not Christmas.
Amir, you wont ever be accepted by them no matter how christmassy you get

Later Khan decided to address the matter and noted how shocked he was for the hate he was receiving for his picture. He though refused to back down and sent a clear message to Islamists, “I don’t give a f**k”.

So shocked by all the hate Iâm getting on my Twitter & instagram for wishing everyone Merry Christmas and posting a picture with my family in Christmas outfits. Just want to tell those people âI donât give a f**kâ

Incidentally Indian Muslim sports-persons too have been trolled by online Islamists for not adhering to their “religious principles”. Recently, Zaheer Khan was trolled for celebrating Diwali, Irfan Pathan for his wife showing her “face and arms” and Mohammed Shami for his now estranged wife’s dress.