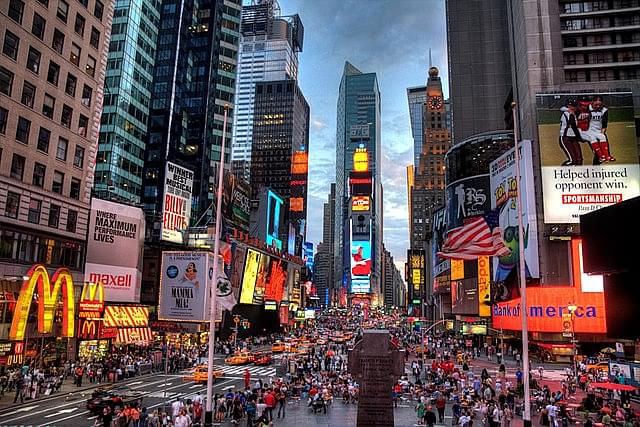 An advertising agency has reportedly backtracked on beaming Lord Ram's images on its hoardings at Times Square in New York after protests by Muslim groups, Clarion India has reported.

The advertising agency named Branded Cities which runs the digital advertisement board for NASDAQ in Times Square also reportedly confirmed its decision to not run these advertisements.

The plan to beam the images of Lord Ram to mark the occasion of Ram Mandir's Bhoomi Pujan was formulated by the Indian-American community in New York.

This was reportedly opposed by a coalition of Muslim groups namely Indian Minorities Advocacy Network - ImanNet, Justice for All, Coalition of Americans for Pluralism in India CAPI, North American Indian Muslim Association NAIMA, Islamic Circle of North America - Social Justice ICNASJ and The International Society for Peace and Justice.

As per the report ImanNet has been pressurising various US lawmakers to stop the advertising by "right wing Hindu groups".

Images of the words 'Jai Shri Ram' in Hindi and English, Lord Ram's portraits and videos, 3D portraits of the temple's design and architecture as well as pictures of the laying of the foundation stone by PM Modi will be displayed across several billboards.