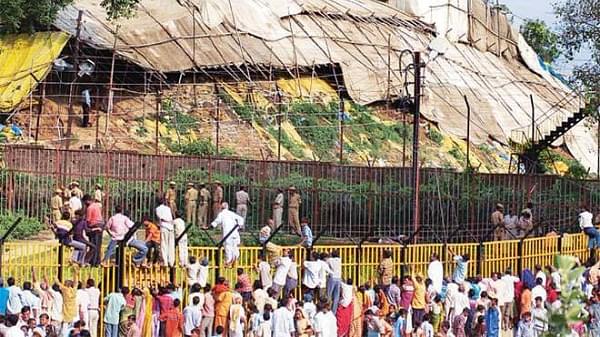 A five-judge bench headed by the Chief Justice of India Ranjan Gogoi will pronounce the verdict in the 134-year-old Ayodhya Ram Janmabhoomi dispute tomorrow at 10.30 am, reports India TV.

After marathon hearing of 40 days, the bench had reserved the judgement on 16 October this year. Reportedly, the judgement is to be pronounced on Saturday, a non-working day, keeping in mind the security implications.

The five-judge bench headed by the CJI Gogoi consists of Justices S A Bobde, D Y Chandrachud, Ashok Bhushan and S A Nazeer.

In anticipation of the judgement, Rashtriya Swayamsevak Sangh (RSS) members as well as prominent members of the Muslim community met and stressed on maintenance of social harmony and unity.

Reportedly, the meetings were carried out at the homes of Bharatiya Janata Party (BJP) leaders Mukhtar Abbas Naqvi and Shahnawaz Hussein.

Prime Minister Modi also instructed the ministers to not make any “unnecessary” statements before the verdict and stressed on maintaining peace. Modi said it was everyone's responsibility to maintain harmony.