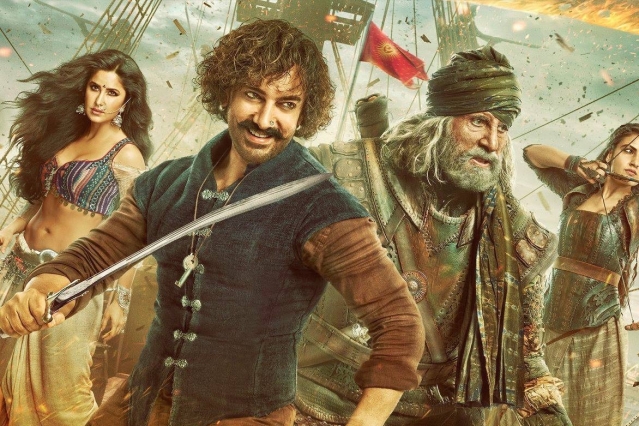 A poster for the movie.

Bollywood star Aamir Khan’s ‘Thugs of Hindostan’ debuted in China to a paltry opening of 10.74 million yuan ($1.56 million) last Friday (28 December), with the movie’s run expected to be the worst among all of Khan’s movies released in the country, reports Global Times.

The Chinese ticketing platform Maoyan estimated that its total run would amount to 96.1 million yuan, far behind what Khan’s runaway hits like ‘Dangal’ and ‘Secret Superstar’ grossed in the country.

The movie competed with Hollywood movies like ‘Aquaman’ and ‘Spider-Man: Into the Spider-Verse’ and Chinese movies ‘Kill Mobile’ and ‘Master Z: The IP Man Legacy’ for screen space during the week.

Despite having Bollywood’s highest ever budget of Rs 300 crore and opening to the largest first-day Hindi collection at Rs 50 crores, it went downhill with its total domestic collection standing at just Rs 193.83 crore.

A special edition of the movie had been released in China, with 44 minutes lesser runtime and with greater focus on Khan’s character to make the move more palatable to the Chinese audiences.

Khan also reportedly travelled the length and breadth of China, two weeks before the premier to promote it and even spent Christmas Eve with fans.

Despite such efforts at redemption, the movie garnered vitriolic responses on Chinese movie sites Douban and Mtime, with 6.2 and 6.6 out of 10 ratings and comments calling it a “knockoff” of Pirates of the Carribean and a “waste of time”.

A Douban user rated the movie one star and said “Please never introduce such a bad movie to China again. Otherwise, the reputation of Bollywood will be ruined in the Chinese market.”

Chinese critics attributed the failure to fatigue from Indian movies (with nine Indian movies having been released this year), lack of knowledge of Indian historical references and the terrible reviews in India.