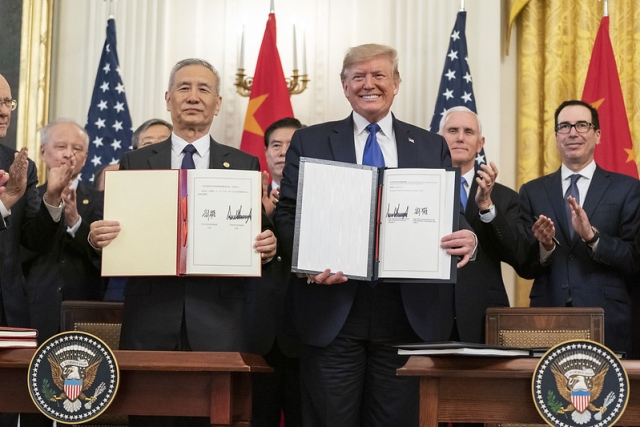 United States and China have signed a 'Phase-1' trade deal that holds the promise of defusing tensions between the two economic powerhouses after 18 months of barbs and sanctions that have hurt manufacturers on both sides and raised tensions across global markets.

US President Donald Trump and China's chief negotiator Liu He on Wednesday (15 January) inked an agreement that will relax sanctions on China. China, in turn, will increase purchases of mainly US farm products.

Chinese President Xi Jinping has hailed the deal as "good for China, the US and for the whole world", while Trump called it an "unbelievable deal".

As things stand today, the Trump administration has abandoned plans to slap tariffs on an additional $160 billion in Chinese imports and has halved existing tariffs on $110 billion of Chinese imports. The Trump government says China is all set to buy $40 billion a year in US farm products.

Even after the deal is signed, US tariffs on $360 billion in Chinese imports will stay in place.

The truce comes after more than a dozen rounds of negotiations during which time both sides raised import duties on billions of dollars worth of each other's goods after the US began the fight.

Trump said the initial trade agreement with China fixes the "wrongs of the past and delivering a future of economic justice and security for American workers, farmers and families."

In an election year where he is running for a second term, Trump is likely to highlight the trade deal as another stamp of economic progress on the same day that the House of Representatives votes to send articles of impeachment against Trump to the Senate for a trial.

Getting tough on China was among Trump's campaign promises in 2016. Soon after he took office, Trump pushed hard to renegotiate trade terms which he claimed have stolen American jobs and punished the country's industry. From a year earlier, the US trade deficit with China has already fallen by about 16 per cent.