After Three Sadhus Killed In Temple For Opposing Cow Slaughter, Over A Dozen Sadhus Flee Auraiya In Fear 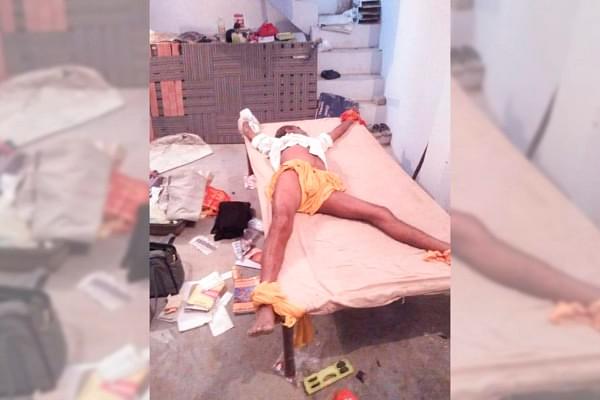 Body of one of the sadhus in Auraiya temple

In Uttar Pradesh’s Auraiya district, where three pujaris (priests) were brutally killed by cow smugglers two weeks ago, other temple pujaris are so scared that they have fled to other areas, says a report in Dainik Jagran.

On the night of 14 August in Kudarkot town, three sadhus (monks), sleeping in one Bhayanaknath temple which they managed, were tied to their cots and assaulted brutally. Two of them, Lajjaram and Hariram, had their tongues chopped off and throats slit. The third, Ramsharan, survived the assault and is hospitalised.

The sadhus had been opposing illegal cow slaughter near their temple, which was located in an isolated area. After Chief Minister Yogi Adityanath gave an ultimatum to the police to catch the culprits in 48 hours, the police raided a so-called “butchers’ colony” in the area and arrested five accused, namely Salman, Nadeem, Shahzad, Najeem, and Jabbar. A report in the Economic Times quoted Auraiya superintendent of police Nageshwar Singh as saying that the accused had chopped the sadhus' tongues “as a signal to people who complain against cow smuggling.”

The brutality of the crime has prompted pujaris of more than a dozen temples in Auraiya, especially those located in isolated areas, to shift to other towns, the Jagran report says. These towns include Sarai Mahajanaan, Lakshmanpur, Chahaiya, and Hamirpur.

Residents of Kudarkot told the newspaper that cow slaughter, which is banned in Uttar Pradesh, had been going on in the area for many years.

Devendra Yadav, a resident of Kudarkot, told Swarajya over the phone that families in the “butchers’ colony” have also fled fearing backlash.