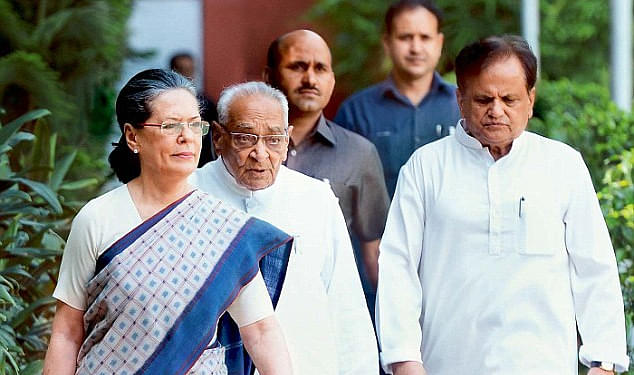 Sonia Gandhi arrives for the CWC meeting with Ahmed Patel.

In a big development in the AgustaWestland VVIP chopper deal investigation, the initials “AP” has been identified as senior Congress leader Ahmed Patel by the arrested middleman, Christian Michel, as per a chargesheet filed by the Enforcement Directorate(ED), reports Press Trust of India.

In the supplementary chargesheet filed under Prevention of Money Laundering Act (PMLA), the agency said, “a part of kickback was paid to defence officials, bureaucrats, media persons and important political persons of the ruling party”. The UPA government was in power then.

The same chargesheet says, Rajiv Saxena, another arrested accused in the case, has been quoted as abbreviating “AP” as Ahmed Patel.

The agency in its 3000-page supplementary chargesheet also named David Syms, Michel’s business partner and two firms owned by them as accused.

The ED went on say that at least around 12 per cent of the contract amount was paid as kick back. About €70 million were paid through the two middlemen involved in the case - Michael and Guido Haschke.

To win the deal to purchase the VVIP helicopters, around €30 million were allegedly paid to the Air Force officers and bureaucrats to swing the deal in favour of Augusta Westland, revealed a budget sheet. Christian Michel has also disclosed various other abbreviations in the sheet.

In the first chargesheet filed against Michael in June 2016, the ED alleged that Michael and others received €30 million (approx Rs 225 crore) from AgustaWestland.

It has also been reported that an individual abbreviated as “RG” purportedly identified as Rajat Gupta was paid Rs 50 crore in this matter. Other phrases such as “Italian Lady”, “Italian Lady’s Son R” have emerged during the course of the investigation.