Alliance In The Works? Haasan Meets Rajinikanth Days Before Announcing Name Of His Political Party 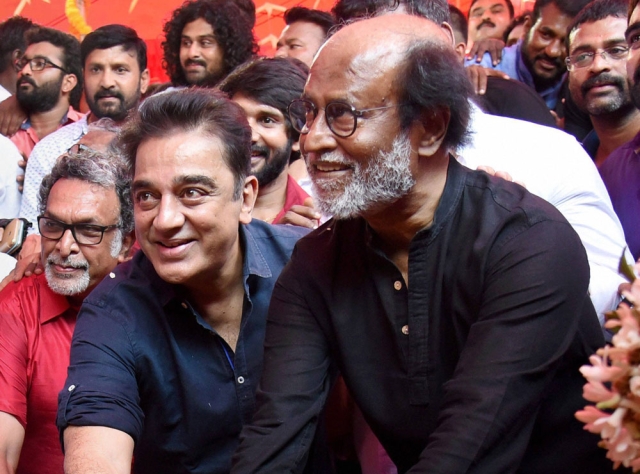 All set to announce the name of his political party, actor Kamal Haasan met superstar Rajinikanth at his Poes Garden residence in Chennai today (18 February).

Haasan will announce his political party’s name on 21 February at Ramanathapuram and kick-start a state-wide tour on the same day.

Ending two decades of speculation, Rajinikanth had announced his entry into politics on 31 December 2017. He had said that he would launch his own party ahead of the Assembly elections and contest all 234 seats in the state.

With both superstars harbouring political ambitions, the meeting has sparked speculations and debate over whether the two will enter into an alliance.

However, both Haasan and Rajinikanth have said that the meet was not a political one. Talking to media after the meeting, Haasan said, “It is a courtesy call and not a political meet. I met him and told him about my decision. I am meeting people I like before I begin my journey. Meeting him is part of friendship, not about politics.

Rajinikanth also spoke to the media. "Kamal wants to serve the people of Tamil Nadu. I will pray to god that he will attain success," the superstar said.

"My style and his are different even in movies," he noted, possibly conveying the message that he was not looking at a joint entry into politics.

Speaking to journalist Barkha Dutt at Harvard University in the US earlier this month, Haasan had signaled that a political alliance with Rajinikanth was unlikely.

“We can exist as friends be on one side. But polity is different. I am trying to make a difference to my state. Our general intent may be the good of the people. But I believe that there is a certain way in which good will have to come,” he had said.

According to the Times of India, he had recently met senior Communist Party of India leader R Nallakannu.