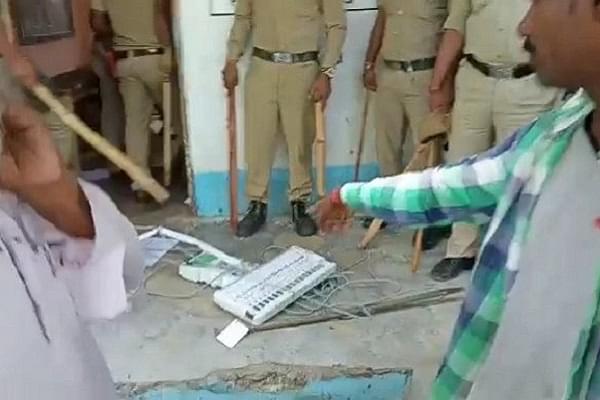 Voting in the second phase of the 2019 Lok Sabha polls began on a controversial note in West Bengal after reports emerged of EVMs being smashed in Chopra following a clash between TMC and BJP workers, ANI has reported.

West Bengal: An EVM was vandalized during a clash between TMC and BJP workers in Chopra; More details awaited. #LokSabhaElections2019 pic.twitter.com/pjuEaSuD0p

Early in the morning a BJP worker was found dead in Bengal’s Purulia district. His body was recovered from a tree and the BJP has alleged a hand of the TMC workers behind this murder.

As per reports, locals blocked national highway-31 in the state over being allegedly prevented from voting in Chopra. It has also been reported that crude bombs were hurled in the area.

CPM MP Mohammad Salim’s car too was attacked in the state. The violence has been pinned on TMC workers.

BJP has alleged that its polling agent was attacked in Kalimpong. Two media vehicles Bengali TV channel, Zee 24 Ghanta have also been vandalised in the state.

Amidst all the disturbing reports of violence and intimidation coming from the state, the state police has maintained an unusual level of calm by claiming that the polls are largely peaceful.