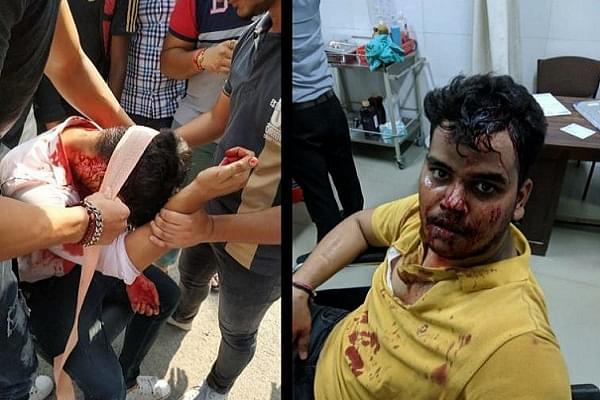 Two youths studying at the Amity University in Noida along with their classmates were brutally assaulted by a gang of around 25-30 men following a parking dispute with a girl.

As per journalist and filmmaker Deepika Bharadwaj, the incident is said to have happened inside the university after the victims and two girls got into a dispute when the latter reportedly refused to move her car. The boys have alleged that the girls had parked their car in the middle of the gate and refused to move it when requested.

The victims allege that about an hour after the dispute when they were attending classes, a mob of 25-30 young men, on the behest of the girls, barged into their classroom when the victims identified as Harsh and Madhav were brutally beaten using rods and nail ridden sticks.

The victims allege that the female teacher as well as the girl students present in the classroom also sustained injuries in the ruckus. Classmates who came to their aid were also assaulted using chairs.

The teacher purportedly suffered a fracture, while one of the main victims Madhav is admitted in ICU and undergoing treatment.

When the victims went to the police station to file a complaint, they found out that one of the girls had already filed a complaint alleging that the boys molested her, a charge which the victims have vehemently denied.

Bharadwaj claims that even Amity administration (which has now claimed that the incident happened outside the campus) threatened the boys following the incident. No action has reportedly been taken against the goons who assaulted the boys and as per Bharadwaj, the victims have actually been booked by the police in what she has dubbed as a fake molestation case.

I spoke to Neeraj Malik, SHO , Sector 39 @noidapolice about #AmityUniversity case. Listen to his rude, arrogant & condescending tone. He himself says molestation case was registered one day after assault case by boys but asks me not to advice him & hangs up.#justiceforharsh pic.twitter.com/D8fA1EF5WR

During her call with the SHO, when Bharadwaj claimed the contentious nature of the molestation case, the SHO exploded and warned her not to give him any advice. While investigation has been initiated by the police in connection with the assault, no arrests have been made so far.

The victims though have received overwhelming support on social media with #JusticeForMadhav being one of the top Twitter trends yesterday.