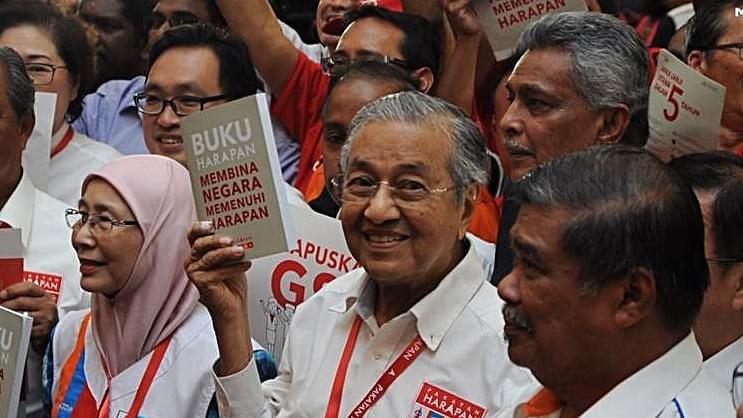 An opposition alliance under the leadership of former Prime Minister (PM) Mahathir Mohamad, 92, has pulled off a stunning victory in Malaysian elections. Pakatan Harapan (Alliance of Hope), the new grouping stitched together by the nonagenarian former prime minister decisively defeated the ruling coalition Barisan Nasional (BN) and unseated the incumbent PM Najib Razak. BN has been in power in Malaysia since independence from Britain six decades ago. Najib Razak leads the United Malays National Organisation (UNMO) which is the dominant player in the BN and was seen as electorally invincible drawing huge support from the ethnic Malay majority.

As per official results available so far, the Pakatan Harapan spearheaded by Mahathir had secured 113 of parliament's 222 seats which is well above the simple majority mark, while Najib's ruling coalition, BN was relegated to second place with just 79 seats.

Mahathir, Malaysia's longest serving PM, ruled the country continuously for 22 years from 1981 till 2003, when he decided to pass on the mantle. He decided to take a plunge into politics once again and switched allegiance to the opposition to take on his former protégé Najib, who has been hit by serious corruption allegations and spiralling cost of living in the South-East Asian country - which is attributed by many to the implementation of Goods and Services Tax (GST).

Burying their old hatchet, Mahathir also joined forces with jailed leader and former deputy PM Anwar Ibrahim. Ibrahim was once sacked by Mahathir on the charges of corruption and later jailed on the charges of sodomy. Mahathir is now expected to hand over the mantle to Anwar who is to be released from the prison in June.

The winning coalition has pledged to abolish GST within its first 100 days in power and has also promised to reintroduce gasoline subsidies, increase petroleum royalties to oil-producing states and raise minimum wages.