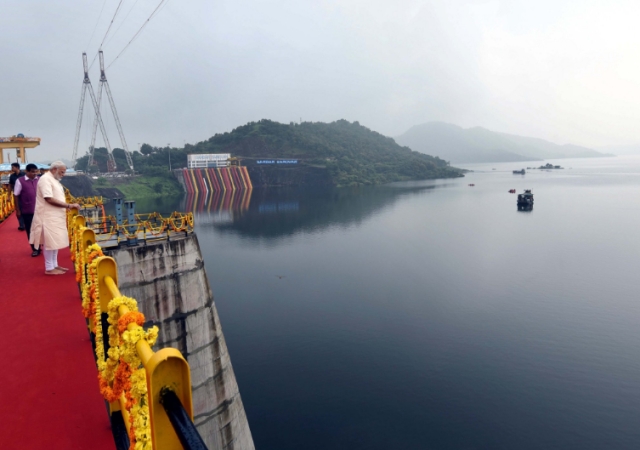 Prime Minister Narendra Modi today (17 September) dedicated the Sardar Sarovar Dam to the nation, almost 56 years after its foundation stone was laid. Calling the dam an ‘engineering miracle’ Modi, who turned 67 today, said while unveiling the plaque, "no other project in the world has faced such hurdles. A massive misinformation campaign was launched against the project, and the discourse soon turned political."

The dam has been described as 'Gujarat's lifeline' with the state’s Chief Minister Vijay Rupani saying more than 18 lakh hectares of land in the state would be irrigated with the waters of Narmada that will flow to over 9,000 villages of Gujarat through a canal network.

According to the Sardar Sarovar project officials, the dam will irrigate 246,000 hectares of land in the strategically important desert districts of Barmer and Jalore in Rajasthan, and 37,500 hectares in the tribal hilly tract of Maharashtra. A special allocation of 0.86 million cubic feet (MAF) of water has been made to provide drinking water to 131 urban centres and 9,633 villages, which is 53 per cent of the total 18,144 villages of Gujarat.

It took 56 years to finally complete the dam’s construction due to court cases and protests by the affected villagers, with the Medha Patkar-led Narmada Bachao Andolan taking the government to the Supreme Court over environmental and rehabilitation issues. The court allowed resumption of work in October 2000.