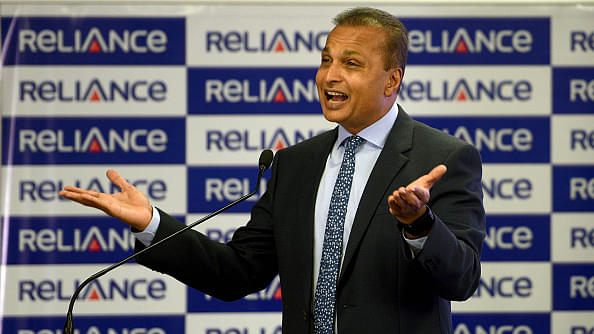 A contempt of court charges looms over RCom chairman Anil Ambani, who had given a guarantee of paying on time to Ericsson.(Photo by Satyabrata Tripathy/Hindustan Times via Getty Images)

Anil Ambani-owned Reliance Communications has been dealt with a massive blow in its efforts to repay creditors and avoid insolvency, reports the Economic Times.

The Department of Telecommunications (DoT), on Tuesday (18 December) told Reliance Jio Infocomm and Reliance Communications (RCom) that it will not approve their deal to trade airwaves as it does not conform with the department’s guidelines.

The development follows Jio’s letter to the DoT seeking assurance from the government that it will not be held liable for RCom’s past dues related to airwaves. The government’s spectrum trading norms stipulate that the buyer will be accountable for the past dues which are not recovered from the seller.

“The trading rules clearly say DoT can ask both the operators or any one of them to pay the dues. Since Jio has imposed conditions, we cannot accept it (the deal) as it goes against the guidelines," a senior DoT official was quoted in the report as saying.

He added that the two telecom companies need to decide between themselves regarding the issue, pending which the deal will not move forward.

The dismissal of the deal will be a set back to Reliance Communications efforts to settle with Swedish telecom equipment maker, Ericsson as the agreement was supposed to fund its Rs 550 crore plus payment to the Swedish company.

As per the report, RCom odds of facing insolvency proceedings again will increase since they already missed the SC ordered 15 December deadline for completing the payment. Beside insolvency, there will be a contempt of court charges against RCom chairman Anil Ambani, who had stood guarantee of paying Ericsson on time.