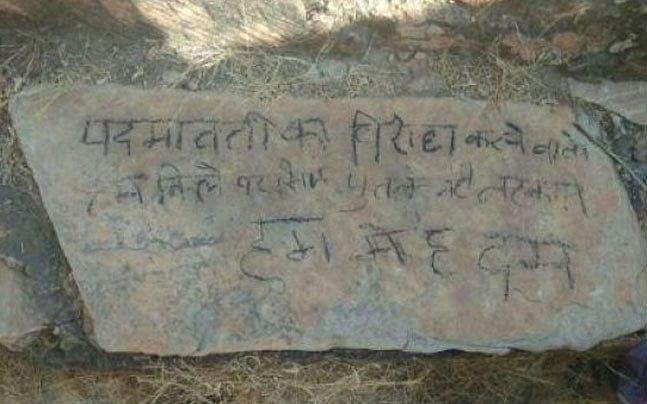 The message found at the site of the murder. (Swati Goel Sharma via Twitter)

Further details have emerged about the Nahargarh murder, where a body, identified as 40 year old Chetan Kumar Saini, was found hanging in the Nahargarh Fort in Jaipur, as reported by IndiaToday.

The murder had been earlier attributed to the Karni Sena, which had denied it’s involvement and condemned the violence. Pinning the act on the Karni Sena was due to an incomplete reading of the scribbles found around the body which made it seem like the act was perpetrated to protest the film.

However, looking closely at the other messages in the scribbles, makes it clear that they are actually aimed towards threatening the Sena against the protests.

in Hindi which translates to

“Those opposing Padmavati, know that we don’t hang just effigies from the forts”,

referring to the Karni Sena protests which are going on in the country.

As the picture becomes clearer, the act clearly seems to be aimed at creating divisions among the people, by trying to provoke the Karni Sena into action.

The Rajput Karni Sena has been protesting against the film, which they claim has improper depiction of Rani Padmavati, a revered figure for the Rajputs.

While the protests continue, the movie hasn’t acquired certification from the film Censor Board which had sent back it’s application citing deficiencies in the application. Censor Board chief, Prasoon Joshi had earlier lashed out against the director, Sanjay Leela Bhansali, citing the incomplete application and a pre-screening that was held before the certification.