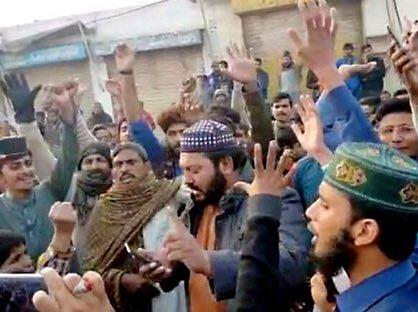 The attack on the Nankana Sahib Gurdwara, the birthplace of Guru Nanak, in Pakistan has triggered protests among Sikhs in India.

While several Sikh groups were to protest outside Pakistan High Commissioner in New Delhi on Saturday (4 January) to condemn the attack, Akali Dal leader Sukhbir Singh Badal has asked Prime Minister Narendra Modi to raise the issue with his counterpart in Islamabad Imran Khan since Sikh minorities in the country were feeling extremely unsafe and insecure.

On Friday (3 January), the Gurdwara was attacked by a huge Muslim mob while Sikh devotees were stuck inside the shrine.

The mob that had gathered outside raised communal and hateful slogans against the minority community and pelted stones on the shrine, videos circulated on social media showed.

Pakistani sources said the mob was led by the family of Mohammed Hassan, the man who had abducted and converted a sikh girl Jagjit Kaur, to protest police action against him.

The Nankana Saheb attack is violative of the 1955 Pant-Mirza Agreement under which India and Pakistan are obliged "to make every effort to ensure that the places of worship" visited by members of their countries "are properly maintained and their sanctity preserved."

In a late night media briefing, Pakistan's Gurdwara Prabhandak Committee President Satpal Singh on behalf of the Sikh community asked the government to act against the hooligans to restore peace.

In an official statement, India strongly condemned the destruction and desecration of the holy shrine.

India has called upon Pakistan to take immediate steps to ensure safety security and welfare of the Sikh community.