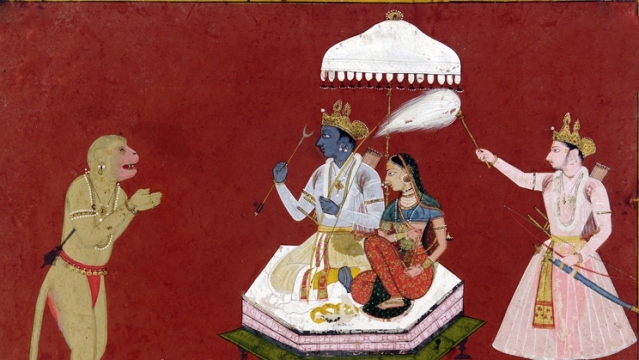 Representative image of a painting depicting Lord Ram and Hanuman.

The Ayodhya Shodh Sansthan headed by Indian ambassador to Iraq Pradeep Singh Rajpurohit undertook an expedition in Iraq this month (June 2019) to look at a mural from circa 2000 BCE that is believed to believed to represent an image of Lord Ram, reports TOI.

The mural is engraved into the Darband-i-Belula cliff, overlooking a narrow pass in Iraq’s Horen Shekhan area; it depicts a bare-chested king holding a bow, a quiver of arrows at his side and a dagger or short sword in his belt. A monkey-like figure can be seen supplicating before the King.

The director of the Ayodhya Shodh Sansthan, Yogendra Pratap Singh, thinks that the mural is a depiction of Lord Ram and Hanuman.

However Iraqi scholars think the mural depicts Tardunni, the head of a mountain tribe and similar engravings can be found elsewhere in Iraq that show kings and kneeling supplicants.

The Ayodhya Shodh Sansthan is a research body under the Uttar Pradesh (UP) department of culture. Indian diplomats at the Erbil Consulate, Chandramouli Karn, along with historians from the University of Sulaimania and the Iraqi governor of Kurdistan also joined the expedition.

The director said, “There is anecdotal evidence on imprints of Ram in Belula pass, but this delegation collected graphical proof to undertake a detailed study to establish a link between the Indian and Mesopotamian cultures.”