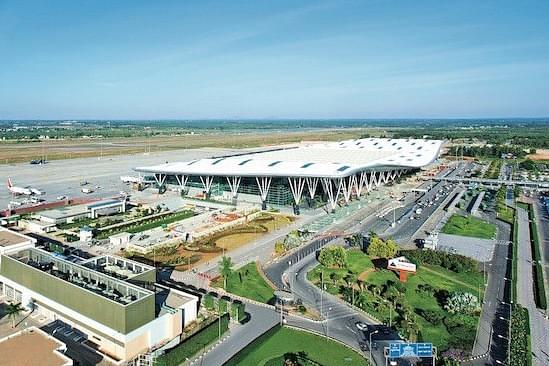 The terminal at Kempegowda International Airport (photo via Twitter)

Bengaluru International Airport Limited (BIAL) which operates the Kempegowda International Airport (KIA) has said that it may have to cancel part of its expansion plans which includes a tunnel to connect to the airport, reports The Times of India. KIA currently has two access roads, a tolled road on National Highway 44 (NH44) and a second one that opened up last year.

BIAL’s expansion plans include a new parallel runway along with a larger second terminal, apart from the tunnel. The Rs 1,200 crore tunnel spans 2.67 km and will pass under the airport.

The airport administration has said that in order to fund the tunnel, it needs the current user development fee (UDF) to remain till 2021. BIAL currently charges Rs 306 and Rs 1,226 for international passengers respectively. The Airports Economic Regulatory Authority (AERA) which decides the fee, however has proposed to bring it down to Rs 79.20 and Rs 316.80 respectively.

Across India, airports levy a UDF to fund airport expansion and connectivity projects. Mumbai International Airport Limited (MIAL) is using the UDF collected to fund three underground metro stations. BIAL has earlier also said that it would fund the construction of both a Railway Station and a Metro station if the Centre and Karnataka were serious about running suburban and metro operations.