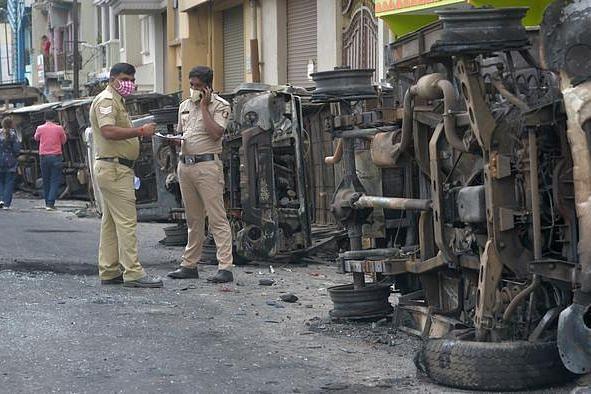 Vehicles damaged during the Bengaluru riots.

The development comes in the backdrop of the Bengaluru Central Crime Branch police issuing a non-bailable warrant (NBW) against former Mayor and Congress leader R Sampat Raj for his alleged role in the Bengaluru riots. Raj is absconding since almost a month now.

Speaking to reporters in Udupi, Katil said that he literally feels very sad for the Congress MLA who is a Dalit and the Congress party instead of protecting its own MLA, is busy protecting culprits.

“What moral rights does the Congress possess now? Their own leader (Sampath Raj) conspires against their own party leader? If any morality is left in them, the Congress leaders should ensure that Raj surrenders to the police,” he asserted.

He further added that the BJP government will take necessary steps to nab him and ensure that the Congress MLA (Akhanda) gets justice. “It is not the matter of our party or their party, it is a question of people’s trust,” he said.

The BJP state unit chief further added that the BJP was neither in touch with Akhanda nor has any plans to include him in the party as of now.

Karnataka Home Minister Basavaraj Bommai told reporters that Raj has no option but to surrender to the police. “I can only say this much at this moment that the police will arrest him soon if he doesn’t surrender,” he said.

Meanwhile, Congress MLA Akhanda Srinivasa Murthy reiterated his demand that the Congress should expel “criminals” who tried to kill him.

“People who conspired against me and my family should be expelled. I am asking Karnataka Pradesh Congress Committee president D.K. Shivakumar to take steps against whom the Bengaluru police have filed chargesheet,” he said.