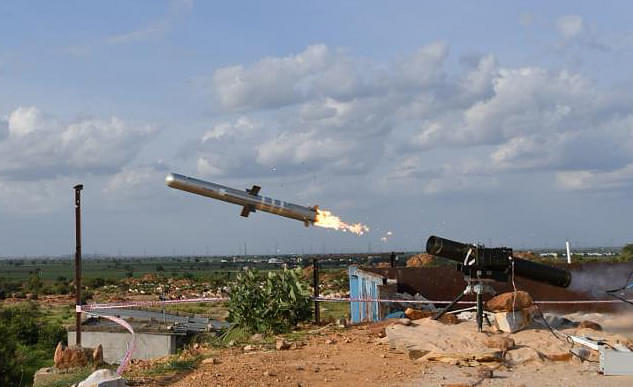 These precise missiles will be lightweight, have state-of-the-art imaging systems and that will allow them to find enemy tanks and hit them at their most endangered points.

India currently faces a challenge with respect to ATGMs fitted with imaging infrared for the purpose of night-fighting. Hopes have been hinged on the Defence Research and Development Organization (DRDO) building the third-generation Nag missiles for the same but apprehensions persist regarding its costs and capabilities.

In fact, the armed forces had to urgently order 240 spike missiles for deployment at the border with Pakistan after the Pulwama attacks and the Balakot air strikes.

However, Tonbo’s imaging system has advanced past the third-generation systems. It has an ‘uncooled’ imaging system and that cuts down the necessity of a cryogenic compressor to cool the imaging sensors. This in turn results in a reduction of total cost by 33 per cent to almost 50 per cent.

Arvind Lakshmikumar, founder and CEO of Tonbo, explained, “Tonbo has built an ultra lightweight uncooled seeker. Nag’s IIR seeker is a cooled, much heavier system. One of the big differences between a cooled system and an uncooled system is the cost. When you have a large expensive missile with long range, a cooled system might be acceptable.”

He added, “In an MPATGM, where the cost of the missile is expected to be as low as possible, using a cooled seeker doesn’t make sense. It’s like putting a Ferrari engine for driving on roads where the maximum speed is 20kmph.”

Apparently, Tonbo’s seeker is built on their deep-learning technology that can automatically classify weak areas of a target. “As the missile is fired, the seeker can identify the vulnerable parts of a target and reorient the missile to hit those parts. This allows an MPATGM to have an impact against armoured hulls,” Lakshmikumar mentioned.

This MPATGM deal is considered to be transformative for startup-based indigenization of critical defence equipment in the country. As of now, the procurement deal is of 2300 pieces once the demonstration is completed by Tonbo Imaging.

Kumar believes that the annual requirement is of a few thousands regularly as India is currently left behind in terms of developing capability on this front.