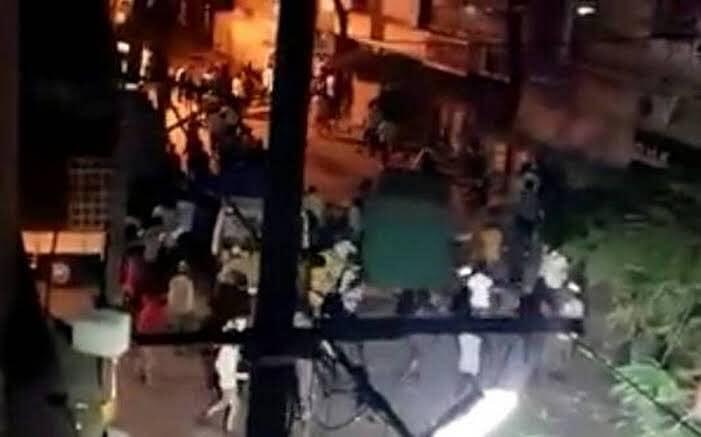 An irate mob of around 200 locals on Sunday (Apr 1) attacked a team of health officials who had reached Padarayanapura area in Chamarajpet, Bengaluru to quarantine 58 people who were believed to have come in contact with COVID-19 positive patients.

The mob destroyed barricades and checkposts set up by police and health officials to monitor the seal down orders around the area following more than 10 Covid-19 cases.

Mob attacks BBMP officials in #Padarayanapura, one of the #COVID19 hotspot in #Bengaluru. The officials visited the area to quarantine secondary contacts pic.twitter.com/mW5XTpKq7d

Padarayanapura, a ward in west Bengaluru dominated by Muslim community, was sealed last week after three people, who had attended the Tablighi Jamaat congregation in Delhi’s Nizamuddin last month, tested positive for coronavirus. As a team of health officials reached there to quarantine 58 people, locals got agitated and started removing police barricades, which had been erected to mark the area as a containment zone.

The medical team, however, had to retreat leaving behind 33 people who were to be taken for quarantine.

Unrest in Padarayanapura: Over 100 people gathered on the streets of Padarayanapura on Sunday night and began breaking the barricades.

After the violence broke out on Sunday, Bengaluru South Deputy Commissioner of Police had reached the spot and brought the situation under control.

Chief Minister BS Yediyurappa held a meeting with Home Minister Basavaraj Bommai and police officers on Monday morning over the incident. “I met the chief minister and briefed him. He told us to act strictly. I’ve told the same to my officials. We won’t tolerate such acts. We’ve arrested 59 people and five FIRs have been registered. I’m going to Padarayanapura. Will make sure others are quarantined,” Bommai said after the meeting.

I met the CM&briefed him. He told us to act strictly. I've told the same to my officials. Won't tolerate such acts. We've arrested 59 people. 5 FIRs registered. I'm going to Padarayanapura. Will make sure others are quarantined: Karnataka Home Minister on ruckus in Padarayanapura pic.twitter.com/JGV3230YYB

Dr Ashwath Narayan, Deputy Chief Minister while condemning the incident said, “We have taken this very seriously and will not tolerate any such activity obstructing the duty of health, BBMP and Police personnel during the time of medical emergency.

“ Police Commissioner has been told to provide full security to Asha workers and other officials. No attack on Covid Warriors will be tolerated.” he tweeted

Police Commissioner has been told to provide full security to Asha workers and other officials. No attack on Covid Warriors will be tolerated.#covid_warriors #Covid19India