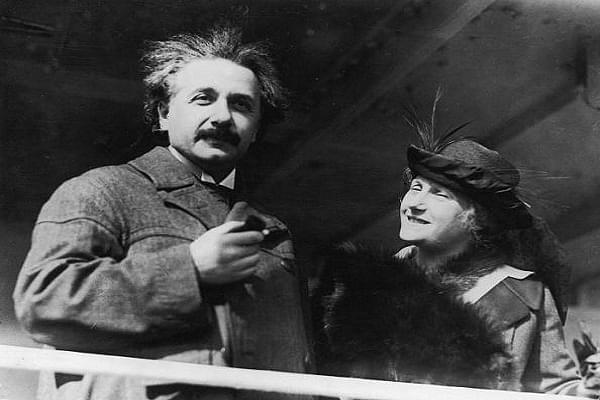 Albert Einstein with his wife on a trip to Egypt. (Photo by Topical Press Agency/Getty Images)

The ‘God Letter’ - a letter in which Physics Nobel laureate Albert Einstein, penned his candid views on God and philosophy, has been sold at the famous auction house Christie’s for a price of $ 2,892,500, CNBC has reported.

The artefact was initially estimated to command a price between $1-1.5 million, but surprisingly went for a much higher bid. As per a statement by Christie’s, the "remarkably candid, private letter was written a year before Einstein's death and remains the most fully articulated expression of his religious and philosophical views."

Even as Einstein was known to steer clear of theological discussions, he was galvanised to write the letter after reading Jewish thinker, Eric Gutkind’s book ‘Choose Life: The Biblical Call to Revolt’.

Einstein vehemently disagreed with Gutkind’s views on the role of the divine in a person’s life and an individual’s free will. The physicist lambasted religion, and in particular Christianity, in his letter, stating, "The word God is for me nothing more than the expression and product of human weaknesses, the Bible a collection of honourable but still primitive legends. No interpretation, no matter how subtle, can (for me) change anything about this."

Einstein was however on the same page as Gutkind when explaining what people strove for in life, notably ‘an ideal that goes beyond self-interest’ and a ‘release from ego-oriented desires’.

The letter had previously been sold in 2008 for $404,000, and again underwent an unsuccessful online auction in 2012 on Ebay with an initial price of $3 million.