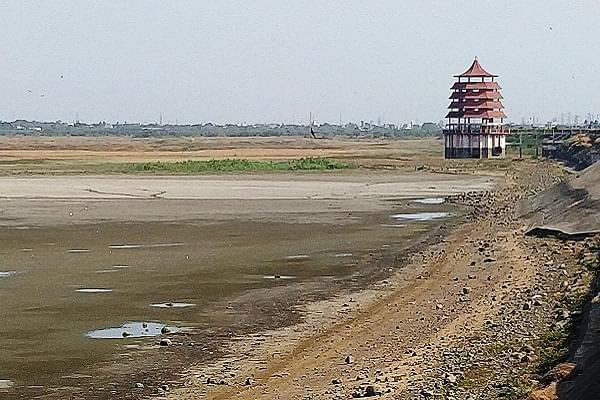 Dried up reservoir in Chennai (@Jay_Apoorva18/Twitter)

There is finally some good news for the people of Chennai after a record-breaking dry spell this year. According to the Met department, a low pressure area over the Bay of Bengal is likely to lead to a change in wind direction and bring some rain in the next two to three days, Times of India has reported.

As per regional meteorological centre officials, the low pressure conditions are favourable for the southwest monsoon to advance into more parts of central, north and southern Bay of Bengal.

According to N Puviarasan, director, Area Cyclone Warning Centre, RMC. “Southwesterly winds will gather strength in the next 2-3 days as the low pressure develops. The system won’t intensify into a cyclone”.

The last rain received by Chennai was on 5 December 2018 and N Puviarasan, director, Area Cyclone Warning Centre, RMC said “It will also bring a change in the moisture levels that may bring rain to some parts of the city. Once southwesterly winds increase, sea breeze will set in as early as 11.30 am and will bring down the temperature by 2 to 3 degrees”.

Chennai has gone without any rainfall for 196 days, apart from some mild drizzle in a few city suburbs last week. The temperatures have remained above 40 degree Celsius due to hot dry winds from the north and northwest.

Chennai is facing a serious water shortage and experts believe that any rainfall may not be significant enough to recharge the groundwater. According to an IMD official “Chennai and coastal areas of Tamil Nadu do not receive much rain during the southwest monsoon. But the break monsoon period may bring some rain.”