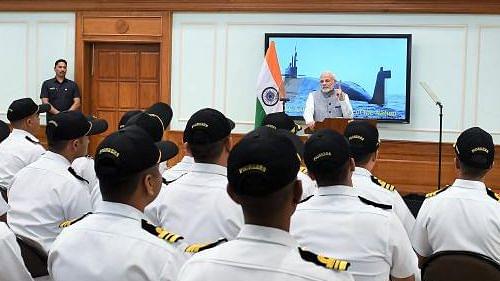 Prime Minister Narendra Modi hailed the achievement of the submarine and underlined the need for credible nuclear deterrence in the present scenario.”I congratulate all those involved, especially the crew of INS Arihant, for this accomplishment, which will always be remembered in our history.” he said while addressing the crew which returned from the deterrence patrol.

Dhanteras gets even more special!

I congratulate all those involved, especially the crew of INS Arihant for this accomplishment, which will always be remembered in our history. pic.twitter.com/tjeOj2cBdX

Calling INS Arihant an ‘open challenge’ to the nation’s enemies, he said its success is a big step towards strengthening national security.

True to its name, INS Arihant will protect the 130 crore Indians from external threats and ensure peace in the region, he added. India’s nuclear triad will be an important pillar of global peace and security.

India is a land of peace. Values of togetherness are enshrined in our culture.

Peace is our strength, not our weakness.

Our nuclear programme must be seen with regard to Indiaâs efforts to further world peace and stability.

The announcement gains importance as it comes in the backdrop of China stepping up its submarine activity in the Indian ocean.

INS Arihant and INS Argihat are part of a top-secret project under which India aims to possess minimum five nuclear submarines.

Apart from being able to launch nuclear missiles, nuclear submarines also stand apart from other defence systems because they can remain at sea for months at a stretch. The only reason a nuclear submarine would have to return to a dock is to check for crew fatigue.