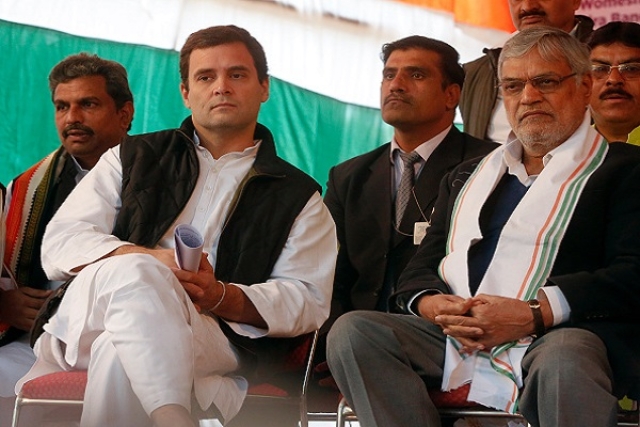 Rahul Gandhi and C P Joshi during a protest at Jantar Mantar in New Delhi. (Photo by Ravi Choudhary/Hindustan Times via Getty Images)

A Bihar court on Saturday (27 April) ordered Congress president Rahul Gandhi to appear in person on 20 May in connection with a defamation case filed against him by state’s Deputy Chief Minister Sushil Kumar Modi, First Post has reported.

Chief Judicial Magistrate Shashikant Roy passed the order after taking cognizance of the allegations by the deputy chief minister against the Congress chief’s remark "all thieves have the surname Modi" during a political rally in Kollar, Karnataka.

Modi, taking grave offence on the comments made by Congress president, had filed a case through his lawyer at Patna's Chief Judicial Magistrate's court under the Section 500 of the Indian Penal Code (IPC).

The Bihar Deputy CM, on Friday (26 April) had appeared before the court and alleged that as he shares the same last name, he felt ridiculed and humiliated by Rahul Gandhi’s remarks, and that it was tantamount to defamation.

While setting the date of next hearing on 20 May and directing the Congress leader to appear in person, CJM Roy also transferred the matter for further hearing to the court of Additional Chief Judicial Magistrate Kumar Gunjan.