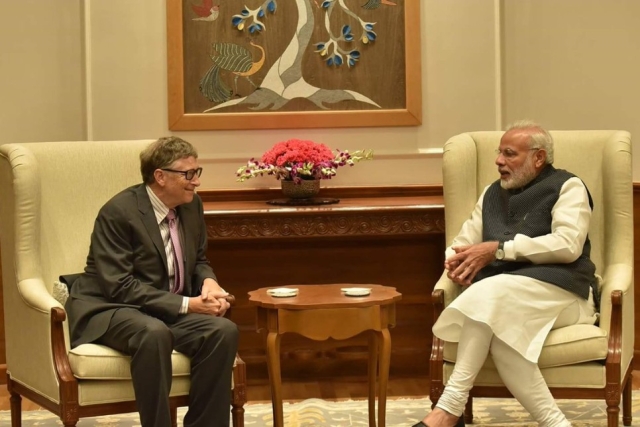 Co-founder of Microsoft and Bill-Melinda Gates Foundation (BMGF), Bill Gates has praised Indian government for bringing sanitation as a focus issue in the public discourse by “shining a light on sanitation” and has said that India must now use innovation and technology for generating zero waste and improving sewage processing capabilities, reported Hindustan Times.

He was speaking at the Goalkeepers event in New York. Goalkeepers is a campaign to accelerate progress towards the Sustainable Development Goals (or Global Goals) which 193 world leaders committed to on 25 September 2015 at United Nations Headquarters in New York.

“The Indian government is to be congratulated for putting a focus on sanitation because the malnutrition rates in India are substantially above what you’d expect, given the strong economic development that India’s had. And that means a lot in terms of kids not developing their full mental and physical capacity,” Gates said.

He said that sanitation is not a much talked about topic and it’s not very common for a government to engage in.

“The fact that the government’s really shining the light on sanitation, that’s not very common, it’s not a topic people want to talk about very much,” said Gates.

He emphasised on the need of equipment for processing the faecal sludge generated and collected from pit latrines and septic tanks which otherwise are discharged untreated into the environment causing various diseases.

“In urban areas, simply digging a pit doesn’t work and you don’t want to dump it into the river, you want to run it through processing. So, through partners, particularly in India and China, we now have much better processing equipment,” said Gates.

BMGF’s Reinvent the Toilet Challenge in India offered grants to innovative sanitation systems which have efficient biodegradation and faecal waste management. “We are seeing more capital investment in that processing capability, we’re seeing an embrace of the new technologies to help out,” he said.

These next-gen toilets need to be affordable, pathogen destroying and off the sewage (self-contained), but at the same time should be easy to use for masses.

“In the long run, what we’d like is a toilet that essentially burns the waste without generating a big waste stream, but that’s in the five to ten-year time frame. In the meantime, we have to help all cities plan and make sure the sanitation is being taken care of,” he said.