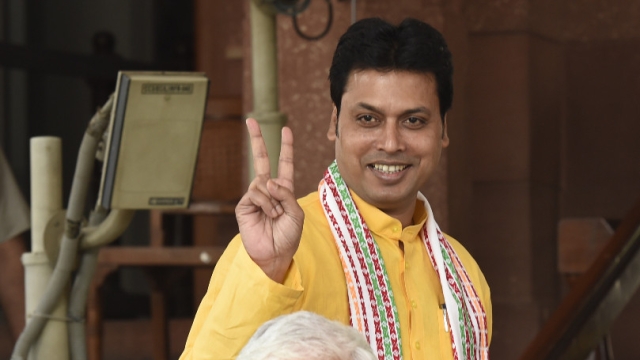 The foundation of a Ram temple at Matai village in South Tripura district by the ruling Bharatiya Janata Party (BJP) and Sanatan Sena, a Hindutva outfit, was heavily criticised by the CPI(M), claiming that the foundation stone was laid by removing a previous memorial of a communist and tribal rights martyr.

“BJP vice-president Subal Bhowmik and one Mrinal Sen, chief of Sanatan Sena’s Tripura chapter, have removed the memorial and laid the foundation stone for a Ram Mandir. There are many temples in the vicinity including Buda Kali Mandir, an ancient temple, which has a history in Bangladesh and erstwhile East Pakistan. Foundation stone for this Ram Mandir was laid simply to erase the history of left-democratic struggle”, CPI(M) state leader Tapas Dutta said on Thursday (October 18), as reported by NIE.

Communist veteran Basudeb Majumder, Deputy Opposition Leader Badal Choudhury and Tapas Dutta along with others have registered a complaint with the Belonia police station and have also written to the district magistrate seeking to reinstate the memorial stone which was removed.

The Superintendent of Police, South Tripura, Jal Singh Meena claimed that he was not aware of any incident of this nature. “I don’t know of any incident where a memorial was replaced by a temple’s foundation stone,” the officer said.

“There was no voice of common people in 25 years of Left Front rule. This land was grabbed by CPI (M). The real owner of the land was present with us on the dais when we laid the foundation stone for Ram Mandir at Matai,” Bhowmik claimed. He also added that his party wants good governance along the lines of Ram Rajya.

Shifting cultivation also known as ‘jhum’ was traditionally practised by tribal people in Tripura for their food and sustenance but was prohibited by the then Congress-led state government in 1968. This led to a group of tribal women led by Mohini Tripura resisting by rebelling against the government’s actions. She was later gunned down during a protest on March 17, 1968. The disputed site was a memorial built for her by the first left government that came to power in 1978.