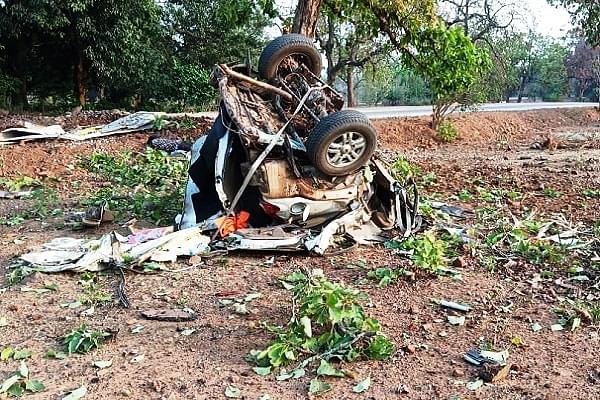 Image from the attack site (@AdityaRajKaul/Twitter)

BJP MLA from Dantewada Bhima Mandavi was killed along with five security personnel in a Naxal IED attack on his convoy on Tuesday evening (9 April), CNN News18 has reported.

The report claims that the IED blast was followed by firing. Earlier media report claimed that the BJP MLA was missing but the news of his demise was subsequently confirmed by DIG-Anti-Naxal Operations P Sundar Raj.

The attack is reportedly said to have taken place between the Kuakonda and Syamgiri area of Chhattisgarh’s tribal Dantewada region. The incident is said to have occurred at about 4.30 PM in the afternoon when the left-wing terrorists triggered an IED blast.

A vehicle carrying security forces too came under the effect of the blast. Subsequently, CRPF reinforcements were rushed to the spot and an encounter was reported as underway between them and the Naxals.

This attack comes just two days ahead of the Lok Sabha polling in the region on 11 April. Today was the last day for campaigning in the area.