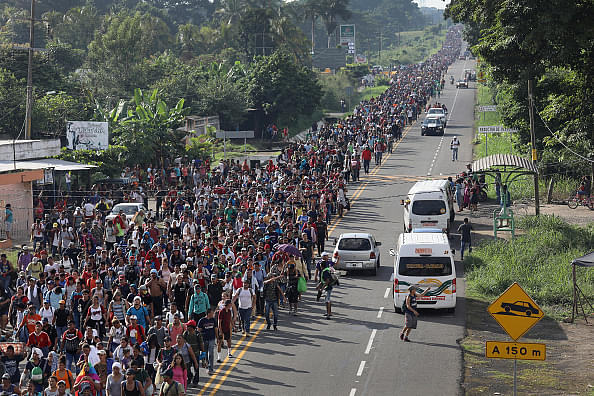 The migrant caravan making its way across Mexico towards the US border. (Photo by John Moore/Getty Images)

US authorities have detained nearly1.7 million migrants attempting to cross the US-Mexico border this fiscal year as arrests by Border Patrol reached the highest levels ever recorded, Washington Post reported.

According to the Washington Post, U.S security officials made 1.66 million arrests along the country's southern border with Mexico, topping the previous high of 1.64 million taken into custody in 2000.

During this election campaign, President Joe Biden had promised to scrap hardline anti-immigration policies of his predecessor, Donald Trump. He also pledged to put in place a more “humane” approach to immigration policy.

Mexico continued to remain the single largest source of illegal migration during the fiscal year, with more than 608,000 Mexican nationals arrested at the border. Migrants from countries including Haiti, Venezuela, Ecuador, Cuban and Brazilians who were arrested while trying to cross the border accounted for 367,000 arrests. Border Patrol also arrested 309,000 Honduran migrants, 279,000 Guatemalan migrants and 96,000 migrants from El Salvador.

Border arrests averaged roughly over half-a-million in the fiscal years between 2012 and 2020,but has seen a surge since Biden took office.

Most of the Haitians were returned under “Title 42,” a healthcare restriction used by Trump that Biden has continued to folliw The policy was implemented in March 2020 at the beginning of the COVID-19 pandemic in an effort to curb COVID infections and allows most migrants to be quickly expelled without a chance to seek asylum.

Biden administration has attributed the record number of arrest numbers to the use of the "Title 42" public health policy.

Immigration advocates, as well as Democratic leaders, have criticised Biden for the swift expulsions of many of those migrants back to Haiti, a country they said is rife with dangers