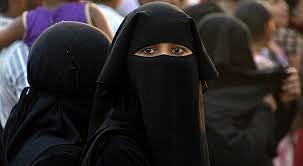 A circular has been issued by the Muslim Education Society in Calicut banning women from wearing burqas from all schools and colleges under its ambit, reports Times Now News.

The circular explicitly mentions that any dress which covers an individual’s face will not be permitted. Several organisations in Kerala are up in arms against the decision, claiming that it goes against religious tenets and sentiments; they contend that the body should’ve taken the decision only after consultations with organisations in the area.

The article commented that if the Islamic face covering could be banned in “Ravan’s Lanka, when will it happen in Ram’s Ayodhya?”

The piece reasoned that people covering their faces could possibly pose a threat to national security.