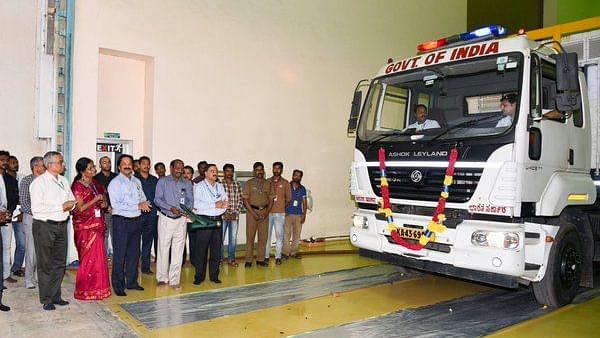 Chandryaan-2 flagged off from ISRO satellite center in Bengaluru. (image via @pallavabagla/Twitter)

India’s second journey to the moon has begun, as the Chandryaan-2 has started its journey from the Indian Space Research Organisation (ISRO) satellite centre in Bengaluru to Sriharikota, a tweet from journalist Pallava Bagla reveals.

Good Luck @isro India's Moon journey begins. #Chandryaan2 flagged off from ISRO satellite center in Bengaluru to India's rocket port at Sriharikota. Liftoff slated for 2.51 am on July 15, 2019. Have fun be happy. pic.twitter.com/1UFIHdSNYx

The Chandryaan-2 mission comprises of three main modules, the Orbiter, Lander (Vikram), and the Rover (Pragyan). The lunar craft will also be carrying a passive experimental instrument of NASA, which will be used by the US space agency to accurately calculate the distance between Moon and Earth.

ISRO on 12 June had announced that the GSLV MK-III, that carries the Chandrayaan-2 India’s second mission to the moon would launch at 2.51 am on 15 July. The 3.8-tonne spacecraft is set to soft land on the moon on 6 September or 7 September.