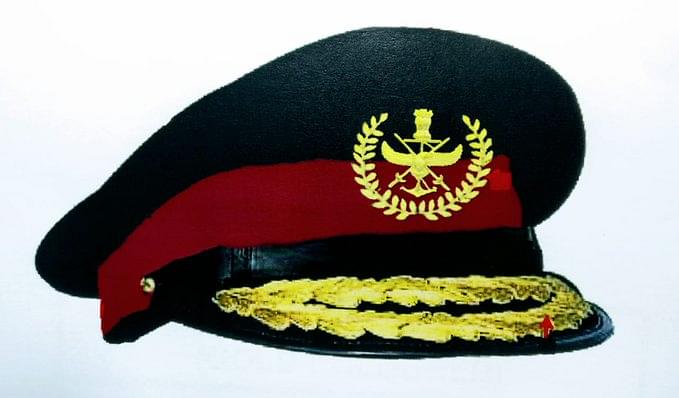 The Peak Cap of the new CDS uniform. (Twitter/@adgpi)

General Bipin Rawat, who will take charge as the country's first Chief of Defence Staff on Wednesday, will wear a new uniform specifically designed for the newly-created post.

The colour of the uniform will remain olive green but it will have all components of the three services' uniforms.

"The colour of CDS uniform will represent the parent service," said a senior Ministry of Defence official.

The insignia has two crossed swords, an eagle and an anchor and above it stands an Ashok symbol.

The cap of the Chief of Defence Staff will be different with badges and accomplishments to represent the three services.

In place of baton on the shoulder to signify the ranks, there will be a maroon patch with anchor, sword and eagle representing all three services.

The service ribbons on the chest will remain as it is but the uniform will not have a lanyard.

The Chief of Defence Staff's residence would be at 3, Kamraj Marg.

Earlier on Tuesday, General Rawat relinquished the post of Army Chief and handed over charge to General M M Naravane.

Before demitting office General Rawat said, "During my three years' tenure as Chief of Army Staff, I can say, we focused more on weapon modernisation, force restructuring and non-contact warfare."

On Sunday, the Ministry of Defence amended Indian Army, Indian Navy and Indian Air Force rules. As per amended rules, CDS or tri-service chief will be able to serve till the age of 65.

As per existing government rules, the three service chiefs can serve up to the age of 62 or for three years, whichever is earlier.

The Union Cabinet on December 24 approved the Chief of Defence Staff's (CDS) post and its charter and duties. The CDS will be a 4-star general who will head the new Department of Military Affairs.