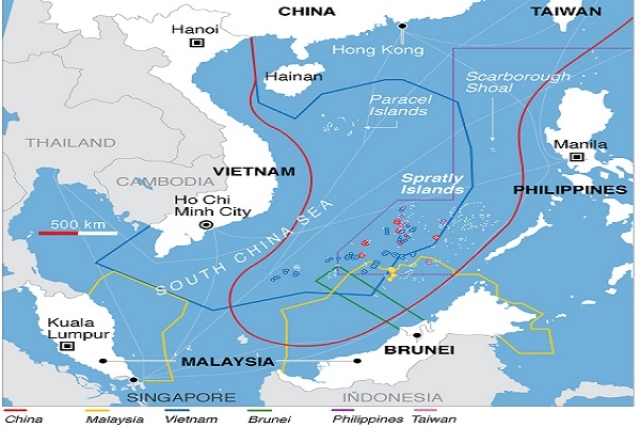 The US on Monday (4 November) accused China of displaying imperialist tendencies and using intimidation to secure control over natural resources in Southeast Asia during the ongoing ASEAN summit here.

Robert O'Brien, the US envoy at the event, spoke in reference to the territorial dispute between China and several countries in the South China Sea, reports Efe news.

"Beijing has used intimidation to prevent Association of Southeast Asian Nations countries from using their natural resources," O'Brien said. "The region has no interest in going back to an imperial era in which big countries tell smaller ones what to do."

The disputed waters of the South China Sea, which is rich in natural resources and a key area in international maritime trade route, is wholly or partially claimed by China, the Philippines, Taiwan, Malaysia, Vietnam and Brunei.

Malaysia, Vietnam, Brunei and the Philippines are members of the ASEAN, along with Myanmar, Cambodia, Indonesia, Laos, Singapore and Thailand.

O'Brien read out a statement on behalf of American President Donald Trump, underlining the shared values between the US and ASEAN nations, and sending an invitation to their leaders to visit the North American country for a summit in the first quarter of next year.

With Trump absent and Chinese Prime Minister Li Keqiang attending the ASEAN summit, Beijing, which is the region's largest trading partner, has taken on a bigger role than the US, especially at a time when the two nations have been engaged in a tense trade war.

US Secretary of Commerce Wilbur Ross on Monday reiterated Washington's "commitment" towards the Indo-Pacific region and highlighted the growing direct investment and bilateral trade between the two sides.

In his speech, Ross brought up a series of economic data to demonstrate the "deep and continuous commitment" of the US towards the region and insisted that the Indo-Pacific strategies of ASEAN and the US aligned with each other.

According to the Commerce Secretary, the US is the main source of foreign investment in the Indo-Pacific region with a figure of $866 billion - higher than China's $504 billion - and also in the ASEAN countries, which he said receive around $271 billion from Washington, a sum bigger than the combined investment of China and Japan.

He also highlighted that last year, trade between the US and the region grew 6 percent to $2 trillion, a volume bigger than American trade with Europe or Latin America.

Ross avoided mentioning the ongoing trade war between the US and the China, the main driving force behind the Regional Comprehensive Economic Partnership, a mega free-trade deal which excludes the US and is being negotiated during the ASEAN summit in Bangkok.

The agreement is promoted by China would unite nearly a third of the global economy.

The US is not a part of the RCEP, which as well as China includes Australia, South Korea, Japan, India, New Zealand and the 10 ASEAN members, who announced on Monday (4 November) their willingness to seal the deal in 2020.