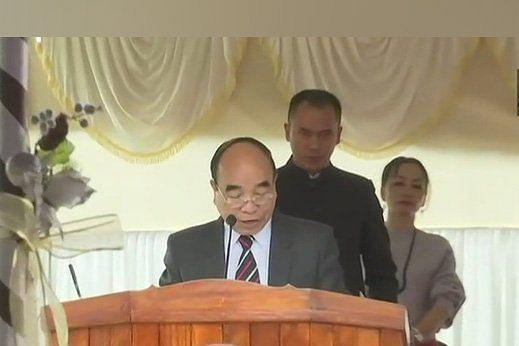 Mizo National Front President Zoramthanga on Saturday sworn in as the Chief Minister of Mizoram. Image courtesy of ANI.

This is for the first time that prayers have been conducted in a swearing in ceremony for the chief minister. The Church had backed the MNF in the assembly polls. MNF is known to be close to the Church and associated NGOs in a state that has majority Christian population at 97 per cent.

Times of India quoted MNF MLA Lalruatkima as saying, “We are doing it for the first time. Rev. Lalhmingthanga, chairman of the Mizoram Kohhran Hruaitute Committee will conduct the reading of the Bible and Leprosy Choir will sing Hallelujah Chorus,” he said on Thursday, 13 December.

Zoramthanga served as the chief of MNF and Chief Minister of Mizoram twice before taking the oath of office for the third time yesterday, around noon in Raj Bhavan.

MNF secured 26 out of 40 Assembly seats in the recently concluded elections and Governor Kummanam Rajashekharan invited Zoramthanga to form the new government. Out of the 26 MLAs, eight are from Zoram People’s Movement and five from the Indian National Congress. BJP opened its account with Buddha Dhan Chamka who won from Tuichawng.