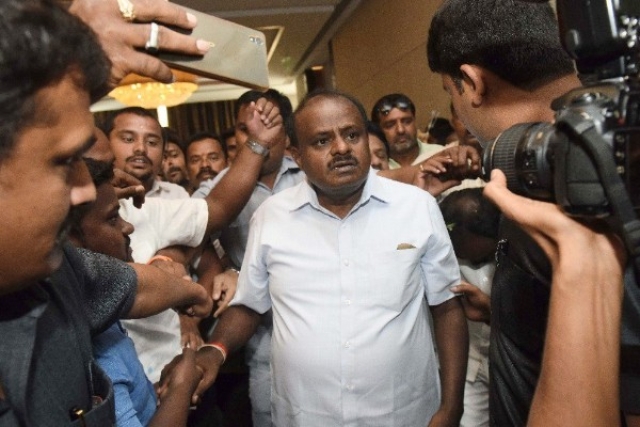 With 13 dissident legislators from Congress and JD(S) refusing to budge and take back their resignations, the coalition government in Karnataka is teetering on the brink of collapse.

In a desperate last ditch attempt to save the coalition government from imploding, Congress leadership has deployed its crisis managers to explore all options to resolve the situation including buying peace with a section of rebel legislators.

Among the ideas being mooted to break the political deadlock is to replace the Chief Minister H D Kumaraswamy.

JD(S) supremo H D Deve Gowda however is learnt to have categorically asserted to the Congress, that his party will pull out of the coalition if it decides to replace Kumaraswamy and install his bete noire Siddaramaiah as the chief minister.

The former Prime Minister reminded the Congress interlocutors that it was the Congress that approached him with the offer of forming the coalition government by promising the elevation of his son Kumaraswamy as the chief minister with a guarantee to ensure his full term.

According to reports in the local media, Deve Gowda is said to have also conveyed to the Congress’s chief troubleshooter and Water Resources Minister D K Shivakumar, that any attempt to anoint Siddaramaiah as the as the chief minister would effectively end the coalition. The duo reportedly met at Deve Gowda’s Padmanabhanagar residence to discuss strategies to save the coalition government.

Gowda expressed deep anguish at the political crisis and blamed Siddaramaiah for orchestrating the political drama that has brought the coalition government to the brink of collapse.

Like many Congress insiders, Gowda believes that that latest spree of resignations is just a gimmick enacted by Siddaramiah faction to blackmail the Congress top leadership and secure cabinet berth for his key lieutenants Byrathi Basavaraj, S T Somashekhar and Muniratna.

Basavaraj, Somasekhar and Muniratna, all party legislators from assembly segments in Bengaluru city, are widely considered to be the ‘money managers’ of the former Congress chief minister. Three of them have turned dissidents.

An angry Deve Gowda is said to have told Shivakumar, “You know whose supporters they are. What was the necessity for them to resign? Was this drama preconceived? Why all this happened when the chief minister was away in the USA?"

Speculations are also rife in state political circles that the Congress top leadership, in an attempt to diffuse the crisis, is considering the option of handing over the party leadership in Karnataka to veteran leader Mallikarjun Kharge.

The state’s political scene is abuzz with the talk that party high command has already conveyed to the rebel MLAs that former leader of Congress parliamentary party in Lok Sabha, who belongs to the Dalit community, will be elevated as the chief minister and this proposal has the support of JD(S) patriarch, Deve Gowda.

Meanwhile, in a further setback to the coalition government’s effort to resolve the crisis, disgruntled MLAs camped in Mumbai on Sunday (7 July) ruled out the possibility of them withdrawing their resignations.

"We are 10 MLAs here, totally 13 MLAs had submitted resignation to Speaker and informed the Governor. All 13 MLAs who have resigned are together and there is no question of us withdrawing our resignation,” Somashekar said in Mumbai.

Speaking to reporters, flanked by other MLAs who have resigned, he said, "Three more MLAs — Ramalinga Reddy, Munirathna and Anand Singh will join us tomorrow.”

In yet another attempt to save the year-old coalition government, the Congress ministers were looking at the option of resigning en-masse to make way for accommodating rebel legislators in the cabinet.

"All of us (Congress Ministers) may resign to accommodate our rebel legislators in the cabinet. If my party asks me to resign, I will. The party will take a decision," Deputy Chief Minister, G Parameshwara, told reporters in Bengaluru today (8 July).

In the 34-member cabinet, 22 are Congress Ministers, including Parameshwara, while 10 belong to the coalition ally, JD(S), including Chief Minister H D Kumaraswamy and one is from the regional outfit KPJP (Karnataka Pragnyavantha Janatha Party), while another is an Independent.

The Congress has now decided to go ahead with this plan and all 22 Ministers have now resigned, as per former chief minister, Siddaramaiah.

In another setback to efforts to salvage the coalition government, Independent MLA, H Nagesh, tendered his resignation from the cabinet.