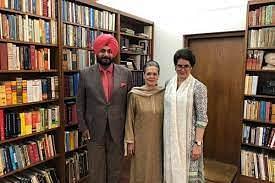 The Congress high-command has apparently not accepted Navjot Singh Sidhu’s resignation form the post of the chief of the Punjab Pradesh Congress Committee (PCC).

Meanwhile, the top leadership hasn’t even spoken to Sidhu over the issue yet.

Sources quoted by the ANI mentioned that the party wishes to give time to the leader. However, strict action could be taken against him if he does not agree to the offer.

In fact, Sidhu’s resignation is said to have triggered further discussions and deliberations in the party.

Already, a minister along with three other close aides of Sidhu stepped down from their respective posts following Sidhu’s resignation announcement.

Sidhu was appointed as the chief of the Punjab PCC amidst serious disapproval of the former state Chief Minister (CM) Captain Amarinder Singh.

Captain Singh stepped down as the CM recently but the Congress chose to replace him with Charanjit Singh Channi.

Following that, Sidhu has apparently expressed his displeasure over certain bureaucratic developments. He also expressed discontent at the scam-tainted Rana Gurjeet Singh being made a cabinet minister post the recent reshuffle.

Sidhu’s resignation has a dealt a massive blow to the Congress high-command that was hoping to sort out the turmoil in the state party unit ahead of the assembly polls early next year.