Congress-JD(S) Still King In Karnataka? Alliance Wins Four Out Of Five Seats In By-Elections, BJP Gets One Seat 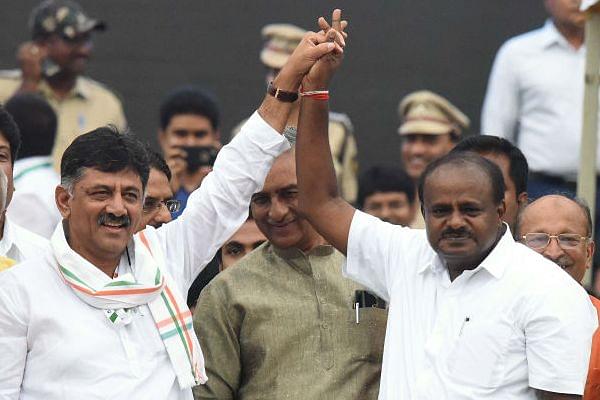 In the by-elections held for three Lok Sabha seats and two Assembly seats, the Congress-JD(S) alliance has managed to sweep four out of five of the seats, upsetting the BJP yet again with its performance.

Party giants like D K Shivakumar, Siddaramaiah campaigned hard for Congress candidate V S Ugrappa in a crucial test in Bellary. The BJP managed to secure only the Shimoga lok sabha constituency with its chief BS Yeddyurappa’s son BY Raghavendra contesting and winning with a margin of 52,148 votes. The alliance won Bellary and Mandya lok sabha constituencies.

Ramanagara and Jamkhandi assembly seats that went for by-elections were won by a huge margin by the coalition partners. From Ramanagara, Anitha Kumaraswamy won with a margin of 1,09,137 votes. This is also aided by BJP’s candidate Chandrashekar who recently quit the party and joined Congress right before elections, leaving the BJP aghast.

Ugrappa won the Bellary seat with a margin of 2,43,161 against Sriramulu’s sister Shanta, India TV reported. This puts up a huge embarrassment to the party as Bellary was seen to be a stronghold, especially with the support of Janardhan Reddy.

Congress candidate Anand Siddu Nyamagouda secured the Jamkhandi assembly seat with a margin of 39,480 votes. Out of the 54.5 lakh voters in all the five seats, the turnout per cent has been recorded at 66 per cent.