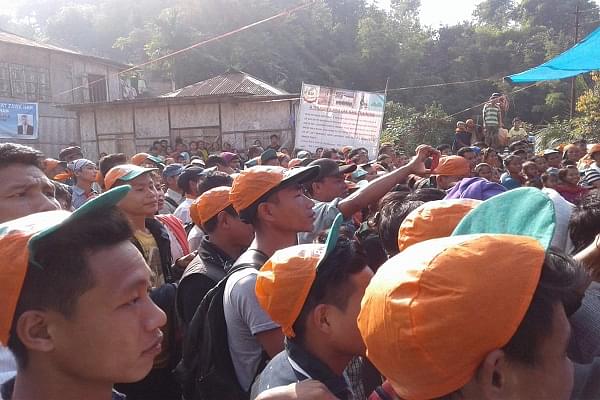 Mizo supporters of the BJP gathered at a rally in the state. (Representative Image) (@BJP4Mizoram via Twitter)

The Bharatiya Janata Party (BJP) has absorbed 20 Congress party members from the Mara Autonomous District Council (MADC), a remote tribal council in the north-eastern state of Mizoram, reports The Hindu. Three of the 20 council members that joined BJP are nominated.

According to the report, with this move, the BJP has trumped the regional political heavyweight, Mizo National Front (MNF) which was trying to take control of the Mara council and had made a move to dissolve it.

The MADC covers about 1,445 sq km of Mizoram's southern tip bordering Myanmar. The last elections in the MADC were held in May 2017 in which the Congress party had won 17 seats out of 25, while the MNF and local Mara Democratic Front (MDF) had won 7 seats. An independent candidate had won one seat in the council.

Later in October 2017, MDF severed its ties with the MNF, and two of its MADC members joined the BJP. Thus, with the induction of 20 Congress leaders from MADC into its fold, the BJP now has a strength of 22 members in the council.