Cross-Voting Seen In Several States During The Presidential Election 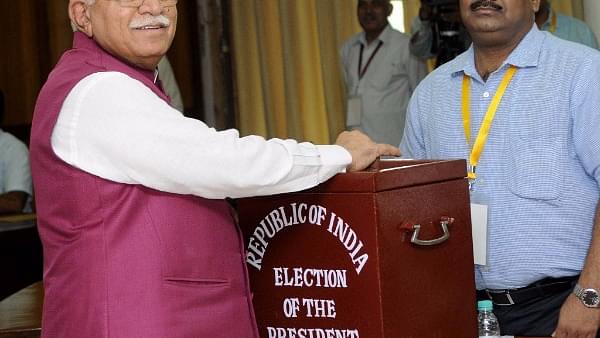 The presidential election, which saw a near-100 per cent turnout, has been an interesting one with many electors voting across party lines and supporting Ram Nath Kovind.

In Assam, for instance, watchdog ‘India Behind the Lens’ reported that Kovind secured votes of 91 Members of Legislative Assembly even as the Bharatiya Janata Party (BJP) alliance accounts for 87. The election contender Meira Kumar, therefore, secured 35 votes even as the opposition had 39.

Two Aam Aadmi Party members and Independent Kapil Mishra were reported to have voted for Kovind in Delhi.

In Maharashtra, Kovind secured 208 votes even as BJP and Shiv Sena account for 185 votes, and Congress-Nationalist Congress Party (NCP) have 83.

When asked about cross-voting, NCP spokesperson Nawab Malik reportedly denied the claim that any voting took place across party lines, asserting instead that the party was voting for Kumar.

Shockingly, Kumar did not receive a single vote in Andhra Pradesh.

Kovind will take oath as the fourteenth President of India on 25 July.