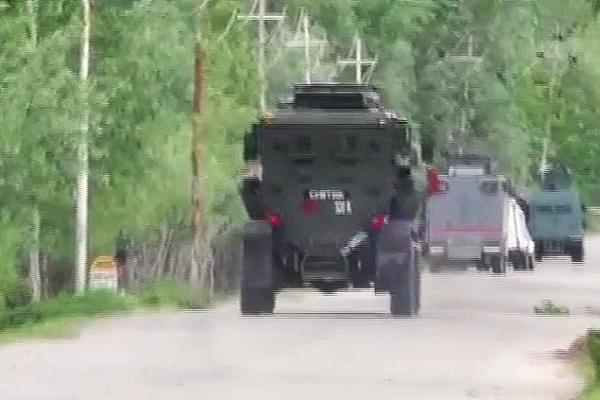 Visuals of a CRPF convoy (@ANI/Twitter)

Just days after a fierce encounter against terrorists in Jammu and Kashmir’s Handwara region, a CRPF patrol party was today (4 May) attacked in Qaziabad area. A terrorist has been eliminated in subsequent retaliation by security forces, ANI has reported.

The area has now been cordoned off. More confirmed details of the encounter are awaited. A search operation has now been launched by the army and CRPF after the terrorists fired upon the 92 battalion of CRPF.

Search ops launched by Army and CRPF in Wangam area of Handwara after terrorists fired upon the troops of 92 Bn of @crpfindia deployed for L&O duty. Area cordoned off and search on. @ThePrintIndia pic.twitter.com/HLlGcth9sN

This attack comes just days after two terrorists including a Lashkar commander took civilians hostage which resulted in a firefight in which five Indian security personnel including a Colonel and a Major were martyred.