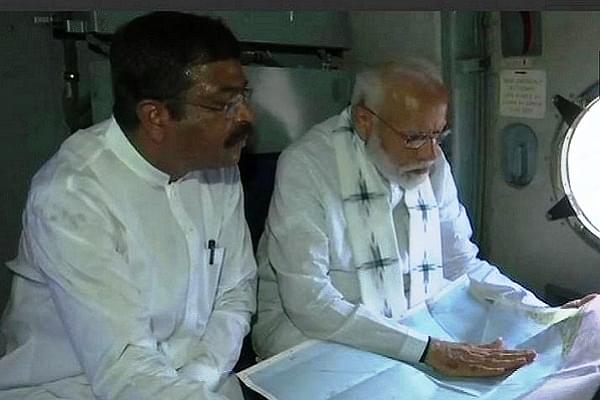 PM Modi during the aerial survey

The Centre had earlier released an advance assistance of Rs 340 crore for the State, when a forecast was made of the ‘extremely severe cyclonic storm’ Fani hitting Odisha coasts on 3 May.

The Prime Minister appreciated the “excellent coordination between the centre and state” in handling the situation.

He also praised the work by Chief Minister Naveen Patnaik “Naveen babu has done good work and now there is need of man, machine and money. We will together work,” The PM while also highlighted the successful evacuation of 12 lakh people averting human causalities.

The PM was accompanied by the Governor and the two ministers on his aerial survey of the affected districts.

Following the survey, PM Modi along with Chief Minister Naveen Patnaik held a review meeting on the relief and restoration work with the government officials.

PM Modi also announced an ex-gratia of Rs 2 lakh to family of each deceased and Rs 50,000 as compensation to persons injured in the cyclone.

The death toll in cyclone rose to 34 with widespread destruction across the state. 21 people have died in Puri alone.