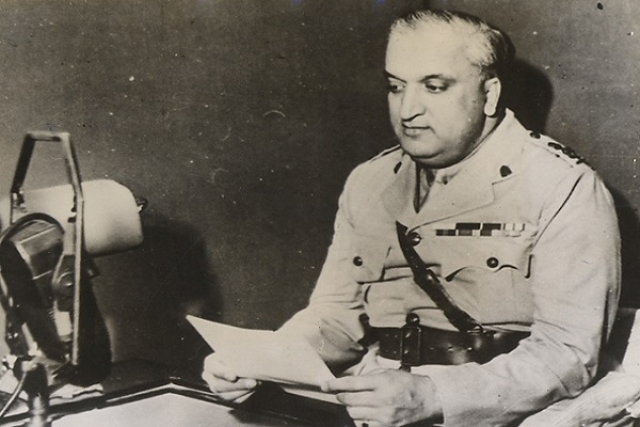 The last king of Kashmir Hari Singh (Pic Via Wikipedia)

Senior Congress leader Karan Singh on Friday urged Jammu and Kashmir Governor Satya Pal Malik to declare the birth anniversary of his late father Maharaja Hari Singh on 23 September as a public holiday, asserting that it was because of the erstwhile ruler that the state became part of India.

Karan Singh said: "Let us recall that it was due to Maharaja Hari Singh ji that Jammu and Kashmir became part of India. It was he who signed the Instrument of Accession on October 26, 1947."

In a statement, Singh, the former 'Sadar-e-Riyasat' of Jammu and Kashmir, said that for many years there has been a strong demand in the state to declare the day as a public holiday. "In fact both my sons got a resolution on this passed in the Legislative Council some years ago, but so far no action has been taken."

Karan Singh said that his father was a progressive and far-sighted ruler who instituted many social and economic reforms for the welfare of the people. "For example, as far back as 1929 he had declared all temples in the state open to Dalits," he added.

"I urge the Governor to declare this day as a public holiday," he said.

Karan Singh's statement comes after the Centre abrogated the special status to Jammu and Kashmir. The state will formally be divided into two Union Territories -- J&K and Ladakh - on 31 October.