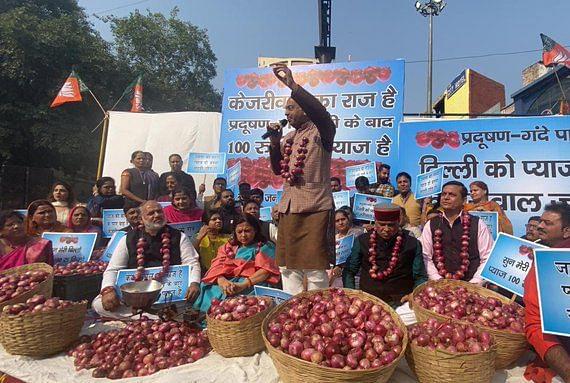 BJP leaders and Members of Parliament Vijay Goel and Meenakshi Lekhi on Friday (29 November) staged a protest against Delhi Chief Minister Arvind Kejriwal over increasing prices of onion in the national capital.

Blaming the Kejriwal government for the onion price hike in the national capital, Goel said that while people in the capital were already suffering from polluted air and water, Kejriwal is also "not letting them eat".

Goel also accused Kejriwal of lying regarding the supply of onion in the national capital.

Kejriwal had said the Centre has stopped onion supply to the Delhi government at a controlled price as onion rates hover over the Rs 100-mark in the capital.

The crunch in onion supply due to heavy monsoon and low production has sent prices soaring with many places seeing an increase of nearly Rs 30-40 per kg. Poor supply has pushed wholesale onion prices to a four-year high.