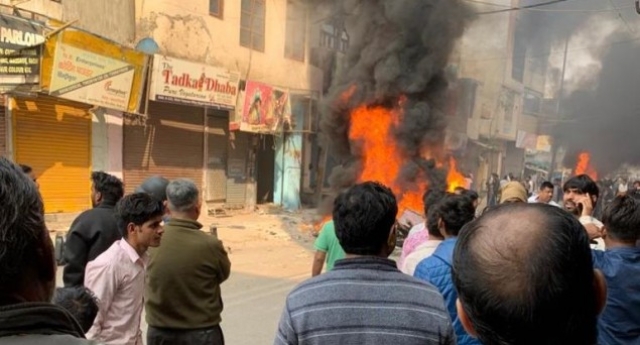 An area during Delhi violence

The death toll in clashes that rocked northeast Delhi over the past two days, has increased to 18, sources at the Guru Tegh Bahadur Hospital said on Wednesday.

Four more persons, brought to the hospital during the night, were declared dead, taking the toll to 17 so far. Two more injured persons brought to the GTB hospital are said to be in critical condition.

Meanwhile, the situation is reported to be returning to normal in most of the violence-hit parts of the city.

Yesterday, NSA Doval reached the violence hit Seelampur area and held meeting with the Deputy Commissioner of Police (DCP) for North-East Delhi in his office. The meeting was attended by senior police officials, which included the newly appointed Special Commissioner of Delhi Police (Law and Order) SN Shrivastava.

The meeting came after the Union Minister for Home Affairs Amit Shah had held as many as three meetings in less than 24 hours. Shah has also reached out to the different parties and called on the need for all to exercise restraint above party lines to contain the situation.

The Delhi police, earlier, on Tuesday evening had issued a shoot at sight order in the city’s Yamuna Vihar area after fresh violence broke out in Jafrabad and Maujpur.

Several parts of northeast Delhi witnessed sporadic incidents of stone-pelting and firing from country-arms, on Monday and Tuesday, leaving more than a hundred people injured. The dead include a police head constable and an assortment of civilians ranging from an auto-rickshaw driver to small businessmen.