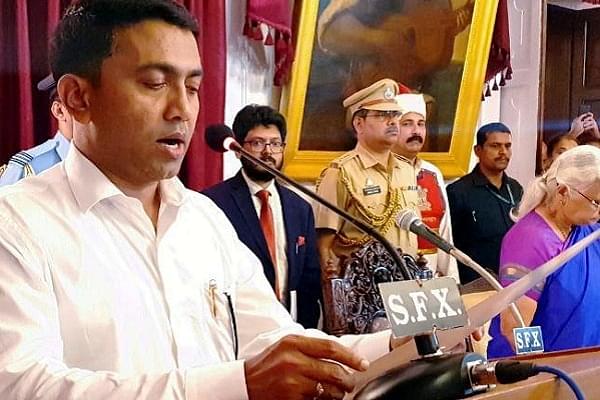 The newly sworn-in Chief Minister of Goa Pramod Sawant had to prove his state government’s majority on Wednesday (20 March) and he passed it with flying colours.

The floor test was carried out in the state assembly after various MLAs paid tribute to former defence minister Manohar Parrikar who passed away after a battle with cancer.

During this floor test, 20 Goa MLAs voted in his favour which ensured his government’s survival.

Ahead of the floor test the Congress party had tried various desperate tactics which included rushing to stake claim for government formation just hours after Manohar Parrikar’s death.

The earlier BJP led coalition government comprised of 12 BJP MLAs, three each from the Goa Forward and MGP, and two independent MLAs.

Following a day of hectic parleying with its alliance partners Maharashtrawadi Gomantak Party (MGP) and Goa Forward Party (GFP) lasting late into the night, BJP’s Dr Pramod Sawant was sworn in as the 24th Chief Minister of the state at the wee hours of morning today (19 March).

Goa Governor Mridula Sinha administered the oath of office and secrecy to the new Chief Minister of Goa around 1.50 am on Tuesday (19 March).
Before taking oath as the CM, Sawant resigned from the post of Speaker of Goa Legislative Assembly.