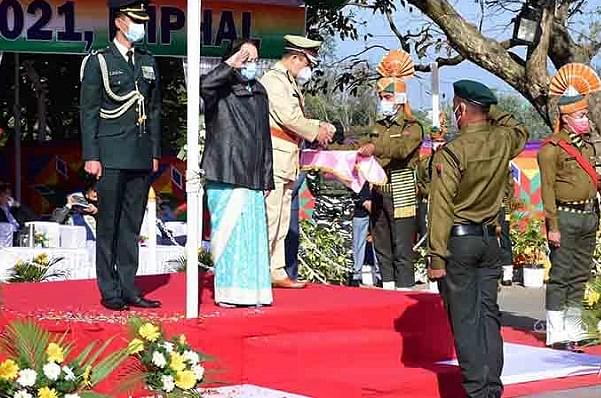 Despite the boycott call by several banned extremist outfits, the 72nd Republic Day was celebrated in Manipur on Tuesday in a befitting manner with Governor Najma Heptulla hoisted the national flag at Kangla Fort here and taking salute from 49 contingents.

According to senior police officials, security was tightened across the state after the Coordination Committee (CorCom) of six major militant outfits called an 18-hour shutdown in the entire state from January 25 midnight to 6 p.m. on January 26.

However, no untoward incident was reported from any part of the state till late Tuesday night.

The Governor, in her message, urged the people to harness the potential of youths in the right direction and strive to work together to make the country strong, peaceful and prosperous. She appealed the people to revere, offer homage and gratitude to the founding fathers for their foresight and understanding.

"Despite many hurdles, the experiment of democracy in India has been successful and we are going from strength to strength and other countries across the world remained respectful to our nation," she said.