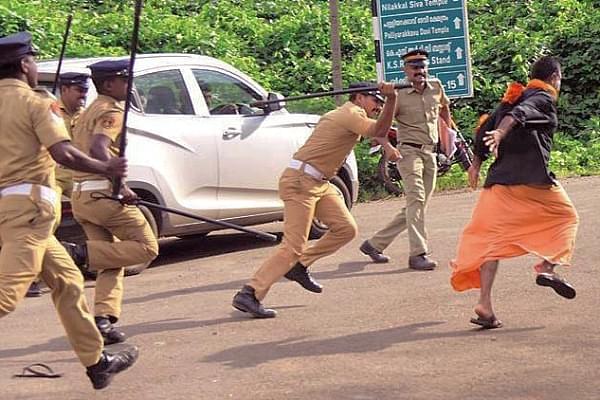 Kerala police has been accused of excesses on protesting Sabarimala devotees. (pic via Twitter)

Over 3,345 devotees who protested against the 28 September Supreme Court verdict on the Sabarimala temple have been arrested since 26 October and as much as 517 cases have been registered at various police stations across Kerala, reports The Economic Times.

Sabarimala priestly family member and activist Rahul Eashwar was arrested on Sunday (28 October) morning, taking the total number of arrests to 3,346. He has been brought to Kochi from the state capital.

Easwar was arrested again after the police received a complaint alleging that he had made provocative remarks in a press conference in Kochi last week over the Sabarimala row.

Reports suggests that over 500 arrests were recorded at various police stations in Pathanamthitta district, where the Lord Ayyappa shrine is located, as well as Thiruvananthapuram, Kozhikode and Ernakulam in the past 12 hours.

Over 122 are on remand so far, while others have been released on bail, according to reports.

However, Kerala Police chief Loknath Behera is reported to have insisted that no arrest should be made of those people who protested by taking part in singing hymns and prayers.

Defending the arrests, state Communist Party of India - Marxist secretary Kodiyeri Balakrishnan on Sunday told the media that this was a ‘regular’ police action. "During the previous Congress-led UDF rule, over four lakh cases were registered against our workers." said Balakrishnan.

The temple opened for five days of monthly pujas on 17 October. However, the protesters, especially women, had ensured that no women in the age group of 10 and 50 could enter sanctum sanctorum.