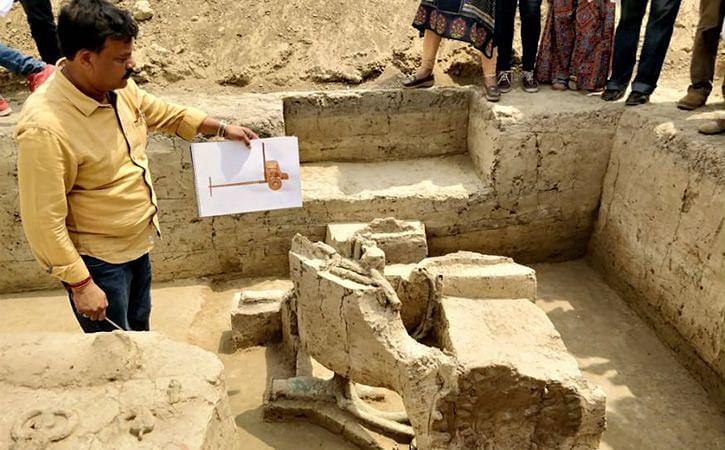 Excavations conducted at the archaeological site of Sanauli in Uttar Pradesh, by a 10-member team led by SK Manjul, director of Institute of Archaeology, Delhi, and co-director Arvin Manjul, have revealed a sensational discovery of light weight vehicles drawn by either horse or ox - in other words chariots. The presence of chariot-like vehicles in pre-Iron age in Harappan context have been already discussed with small toy like models having been excavated. But now this is the first discovery of a complete vehicle from a burial site. So which animals drew these 'chariots'? According to Manjuls’ cautious response, it isdebatable though 'the preliminary understanding points at the horse'. Further, according to Manjul, there has been evidence of horse in the Chalcolithic period. The excavations have revealed three chariots.

It is important to note here that the discovered 'chariot' has 'a solid wheel with no spokes.' Because the Anatolian chariots which initially were considered (and still being considered by an influential section of archeologists) to have carried horses and IE languages into Indian land mass, had wheels with spokes. However, archaeologist Jonathan Mark Kenoyer has pointed out that between 2600 and 1900 BCE, in the terracotta depictions of carts and wheels, there may be 'depictions of what may be spoked wheels, during this period of urban expansion and trade may reflect different functional needs, as well as stylistic and cultural preferences.' To him Dr B B Lal's identification of wheel with spokes depicted in the terracotta from the site of Rahkigarhi is the 'most convincing'. At the same time late Dr S R Rao too had shown depiction of wheel with spokes from Lothal.

While through the absence of the depiction of war scenes in Indus valley seals (except in a single one), it has been argued that the society was a peaceful one that knew no war. However the burial with the chariot and war artifacts falsifies the picture of peaceful Harappans. The discovery points to the presence of warrior elite. Manjul has been quoted as saying that the discovery has 'confirmed that they were a warrior class. The swords have copper-covered hilts and a medial ridge making it strong enough for warfare. We have also found shields, a torch and daggers'.

On the whole the discovery has created a real sensation and a collateral controversy. One group of historians, has been quick to point out that the presence of chariots and warrior elite make the Mahabharata plausible in an age earlier than have been usually thought. Another group of historians who always have taken a pleasure in pointing out archaeological implausibility for the ancient time scales of the epics, are found taken by surprise and are struggling to put up explanations.