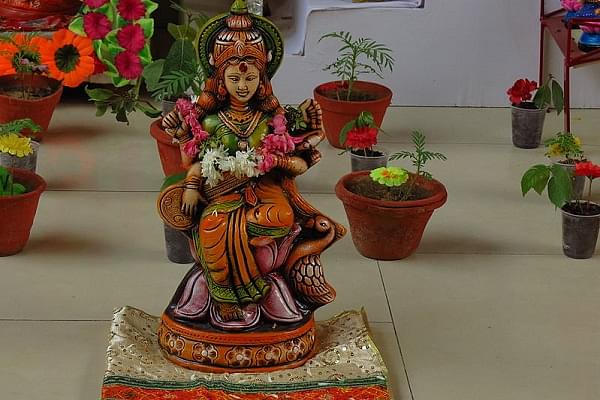 Representative image of a Saraswati idol. (Pic by Siva301in/Wikipedia)

A controversy has broken out at Bangalore University’s Jnanabharathi campus after the flaring up of a dispute between two student factions over the installation of a statue of Gautam Buddha at a spot designated for a figure of Hindu deity Saraswati, reports The News Minute.

A group belonging to the Federation of Bangalore University Post Graduation and Research Scholar Students had put in place a statue of Buddha at a spot where a new statue of Saraswati was meant to be installed in replacement of an older statue of the goddess which had been in place since 1973.

Another group of students, after noticing a different statue in place, raised objections with the college administration and even launched a protest.

Police also had to be called to the campus after a contentious exchange of words between the two sides.

The Karnataka government has decided to intervene to maintain the earlier status quo.

“The university should not have replaced one statue with another. We have great respect for both Saraswati and Buddha. I have instructed the police chief to ensure things remain as they were earlier,” Karnataka Home Minister M B Patil said to reporters on Tuesday (7 May).

The university administration called a high-level meeting to discuss the issue, deciding that the Buddha statue is going to moved to a different location, while the Saraswati statue will be installed at its designated spot.